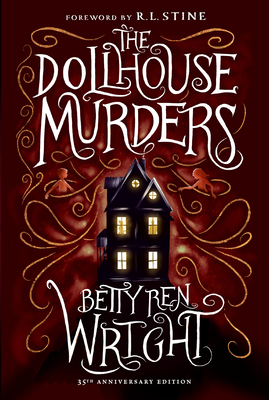 This special anniversary edition of the hair-raising mystery that's kept readers up at night for thirty-five years features a foreword by Goosebumps creator R.L. Stine and a new embossed, glow-in-the-dark jacket.

Amy is terrified. She hears scratching and scurrying noises coming from the dollhouse in the attic, and the dolls she was playing with are not where she left them. Dolls can't move by themselves, she tells herself. But every night when Amy goes up to check on the dollhouse, it's filled with an eerie light and the dolls have moved again! Are the dolls trying to tell her something? Could this all be connected to the murders of her great-grandparents?

Sinister secrets unravel as Amy gets closer to revealing the mystery of the dolls in this haunting novel that combines complicated family relationships with a bone-chilling mystery. Even readers who love scary stories will want to keep the lights on after finishing!

On many state reading lists and an Edgar award nominee when first published, the hardcover edition has been unavailable for years. The all-new foreword and jacket make this spooky classic perfect for sharing with a new generation.

BETTY REN WRIGHT (1927-2013) was the distinguished author of many award-winning books for young readers, including Christina's Ghost. In addition to her middle-grade mysteries, Wright also penned more than thirty-five picture books for children, including The Blizzard, which appeared on state award master lists and was a Bank Street Best Children's Book of the Year. In 2006 she was honored as a Notable Wisconsin Children's Author by the Wisconsin Library Association.

"The quintessential ghost story...The story is so vivid that even now, years later, I can close my eyes and see the dolls moving in the dollhouse at night, restaging the murder of Amy's grandparents. Although this book may be aimed at middle-school readers, its sneaky, creepy power is sure to appeal to teens, too." —School Library Journal