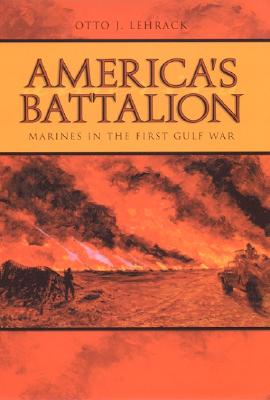 America's Battalion tells the experiences of one unit, the 3rd Battalion, 3rd Marines, during Operation Desert Storm--the first Gulf War. Building from interviews with the members of the batallion, Otto Lehrack examines the nature of warfare in the Persian Gulf. The terrain of the Arabian Peninsula and the disposition of the enemy dictated conventional warfare requiring battalion and regimental assaults coordinated at the division level, so interviewees are primarily the officers and senior non-commissioned officers concerned.

The 3rd of the 3rd, also known as "America's Battalion," had just returned from deployment in the summer of 1990 when they were required to immediately re-deploy to a strange land to face a battle-hardened enemy after Iraq invaded Kuwait. Theirs was only the second Marine battalion to arrive in Saudi Arabia. They participated in the first allied ground operation of the war, played a key role in the battle for the city of Khafji, and were the first to infiltrate the Iraqi wire and minefield barrier in order to provide flank security for the beginning of the allied offensive.

Facing an enemy that had used some of the most fearsome weapons of mass destruction--chemical and biological agents--against its former opponents and against its own people, the Marines had been prepared for the worst. Lehrack has documented this unit's remarkable performance through the accounts of those who participated in the historic events in the Persian Gulf and returned home to tell of them.

Otto J. Lehrack is an independent scholar and author of three books, including No Shining Armor: The Marines at War in Vietnam, An Oral History, and The First Battle: Operation Starlite and the Beginning of the Blood Debt in Vietnam, both of which were Military Book Club Main Selections.

"Engrossing . . . with a wealth of first-hand accounts. . . . Coverage of the Khafji engagement alone is worth the book."--Lieutenant Colonel Charles Cureton, author of U.S. Marines in the Persian Gulf, 1990-1991: With the 1st Marine Division in Desert Shield and Desert Storm

"The focus on 'middle-level managers' makes this book of interest and value. The accounts are good. . . . Following members of a single battalion provides a unity to the story, . . . and the different perspectives convey the confusion of combat. The language is raw, but authentic. Current fighting, some twelve years after these events, makes it significant narrative of the past as prelude."--Charles D. Melson, Chief Historian, Marine Corps Historical Center