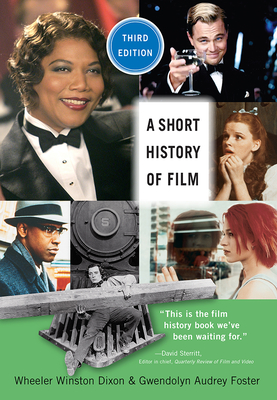 With more than 250 images, new information on international cinema—especially Polish, Chinese, Russian, Canadian, and Iranian filmmakers—an expanded section on African-American filmmakers, updated discussions of new works by major American directors, and a new section on the rise of comic book movies and computer generated special effects, this is the most up to date resource for film history courses in the twenty-first century.

WHEELER WINSTON DIXON is the James Ryan Professor Emeritus of Film Studies at the University of Nebraska, Lincoln. He is the author of many books, including Black and White Cinema: A Short History (Rutgers University Press), and an internationally known experimental filmmaker.

GWENDOLYN AUDREY FOSTER is Willa Cather Professor Emerita of Film Studies at the University of Nebraska, Lincoln. She is an award winning experimental filmmaker and a prolific author.

"This is the film history book we've been waiting for."
— David Sterritt

"A Short History of Film is a comprehensive and detailed overview of the last 100 years of international film history. It will prove to be a useful reference tool for all students of film, both in and out of the classroom."
— Paula J. Massood

"A new history of international film at an affordable price. Nothing like those text book prices for a change. Includes perspectives on women and minorities in film along with innovations in technology, genres, studios, and conglomerates."
— Stephanie Ogle

"This excellent introduction stands out in a crowded field with its lively, accessible writing, broad coverage, and particular focus on traditionally marginalized figures in film history...the most striking aspect of the book is the coverage of women, African Americans, and Third World filmmakers, which strongly complements its solid coverage of American and European film. Illustrations abound, and even the best-versed cineaste will find new films to track down after reading the breezy, enthusiastic analysis in this book. Highly recommended for all collections, this text would also make an excellent textbook for introductory film-studies courses."

"With the goal of offering 'a fast paced tour' of movie history, Dixon and Foster have produced a study in the tradition of Paul Rotha's The Film till Now. The authors touch all the bases--they address new trends in international moviemaking, technologies, and critical theory and the emergence of new national and ethnic cinemas--and relate film history to social history. Each new technique, style, school, trend, and newly visible ethnic or feminist group takes its place in the larger history, and Dixon and Foster make it all accessible to the neophyte reader without ever breaking the pace. Uncommonly well-reproduced stills and a topically organized bibliography enhance the discussion. Highly recommended."

"One of the more important features is the focus on women directors who may not be well known to the general public; this makes the book timely and a welcome change from older film textbooks that are more implicitly biased. A good read for those who are just starting to learn more about the silver screen."
— Choice

"A comprehensive and detailed overview of the last 100 years of international film history—what to watch while 'sheltering-in-place!'"
— LitHub