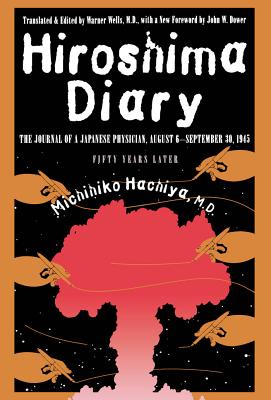 By Michihiko Hachiya
$27.00
Not currently in store. Available to ship from distributor's warehouse.

The late Dr. Michihiko Hachiya was director of the Hiroshima Communications Hospital when the world's first atomic bomb was dropped on the city. Though his responsibilities in the appalling chaos of a devastated city were awesome, he found time to record the story daily, with compassion and tenderness. His compelling diary was originally published by the UNC Press in 1955, with the help of Dr. Warner Wells of the University of North Carolina at Chapel Hill, who was a surgical consultant to the Atomic Bomb Casualty Commission and who became a friend of Dr. Hachiya. In a new foreword, John Dower reflects on the enduring importance of the diary fifty years after the bombing.