Eating Grass: The Making of the Pakistani Bomb (Paperback) 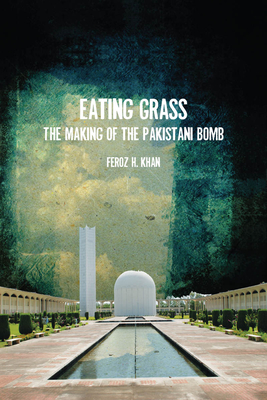 The history of Pakistan's nuclear program is the history of Pakistan. Fascinated with the new nuclear science, the young nation's leaders launched a nuclear energy program in 1956 and consciously interwove nuclear developments into the broader narrative of Pakistani nationalism. Then, impelled first by the 1965 and 1971 India-Pakistan Wars, and more urgently by India's first nuclear weapon test in 1974, Pakistani senior officials tapped into the country's pool of young nuclear scientists and engineers and molded them into a motivated cadre committed to building the 'ultimate weapon.' The tenacity of this group and the central place of its mission in Pakistan's national identity allowed the program to outlast the perennial political crises of the next 20 years, culminating in the test of a nuclear device in 1998. Written by a 30-year professional in the Pakistani Army who played a senior role formulating and advocating Pakistan's security policy on nuclear and conventional arms control, this book tells the compelling story of how and why Pakistan's government, scientists, and military, persevered in the face of a wide array of obstacles to acquire nuclear weapons. It lays out the conditions that sparked the shift from a peaceful quest to acquire nuclear energy into a full-fledged weapons program, details how the nuclear program was organized, reveals the role played by outside powers in nuclear decisions, and explains how Pakistani scientists overcome the many technical hurdles they encountered. Thanks to General Khan's unique insider perspective, it unveils and unravels the fascinating and turbulent interplay of personalities and organizations that took place and reveals how international opposition to the program only made it an even more significant issue of national resolve. Listen to a podcast of a related presentation by Feroz Khan at the Stanford Center for International Security and Cooperation.

Brigadier General (retired) Feroz Khan is a lecturer in the Department of National Security Affairs at the Naval Postgraduate School, Monterey. He served with the Pakistani Army for 30 years, most recently as Director, Arms Control and Disarmament Affairs, within the Strategic Plans Division, Joint Services Headquarters, and has represented Pakistan in several multilateral and bilateral arms control negotiations. General Khan has been a visiting scholar at the Woodrow Wilson International Center for Scholars and has held fellowships at Stanford University's Center for International Studies and Cooperation, the Brookings Institution, the Center for Non-Proliferation Studies at the Monterey Institute of International Studies, and the Cooperative Monitoring Center, Sandia National Laboratory. He has also taught as visiting faculty at the Department of the Defense and Strategic Studies, Quaid-e-Azam University, Islamabad.

"Feroz Khan, a retired Pakistan Army general who served as Director of the Strategic Plan Division, Pakistan's nuclear security apparatus, has written the first comprehensive insider account of the Pakistani nuclear weapons program . . . Framed as a story of indigenous triumph, Eating Grass nonetheless also serves as a history of the failure of non-proliferation regimes—or as a how-to guide for how to evade them."—Timothy Nunan, The Sunday Guardian

"Eating Grass: The Making of the Pakistani Bomb, uses primary source material and personal interviews to explain and analyze the genesis of Pakistan's nuclear program. Understanding Pakistan's nuclear development is not only important for Pakistan scholars but also for nuclear analysts more broadly. Nuclear scholars are working with an incredibly small sample of nine nuclear states, so gaining a robust understanding of each nation's path to the bomb is essential. General Khan discussed a wide range of issues as an introduction to his book's more comprehensive analysis."—Sarah Wiener, CSIS