On Hallowed Ground: The Story of Arlington National Cemetery (Paperback) 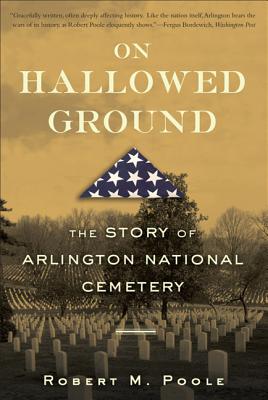 By Robert M. Poole
$21.60
Not currently in store. Available to ship from distributor's warehouse.

Created at the end of the Civil War, Arlington National Cemetery has become a part of the landscape as fixed in the national imagination as the White House or the Capitol building. The mansion at Arlington's heart, and the rolling hills on which it sits, had been the family plantation of Robert E. Lee before he joined the Confederacy; strategic to the defense of Washington, Arlington became a Union encampment, a haven for freedmen, and a pauper's cemetery for soldiers dying in the nation's bloodiest conflict.

With the passage of time, new layers of meaning were added to Arlington, which would become our nation's most honored shrine. More than three hundred thousand rest in Arlington's 624 acres, representing every war the nation ever fought. Each tombstone tells a story, from the Tomb of the Unknowns, so carefully tended today, to the eternal flame at John F. Kennedy's grave to the final resting places of ordinary citizen-warriors sleeping among Arlington's rolling green hills. Their stories, and the cemetery's time-honored rituals-the horse-drawn caissons, the rifle salutes, the sounding of Taps-still speak to us all.

Robert M. Poole is an editor and writer whose assignments for Smithsonian and National Geographic have taken him around the world. He is the author of Explorers House:National Georgraphic and the World It Made, and is a contributing editor at Smithsonian. Poole has been published in the New York Times, Washington Post, and Preservation.

“Poole's book tells the stories of many of those buried in 70 sections across these rolling hills just across the Potomac from Washington, D.C. On Hallowed Ground is part history lesson, part tourist guide, part mystery novel.” —USA Today

“Engaging … Robert Poole is an adroit sketcher of historical events, but even more of character.” —Economist

“Gracefully written, often deeply affecting … like the nation itself, Arlington bears the scars of its history, as Robert Poole eloquently shows.” —Washington Post

“On Hallowed Ground is a beautiful portrait of the place where we honor their fallen comrades.” —Bookpage

“Graceful and dignified…perhaps more than any other secular site in America, Arlington casts a religious spell. The effect is not accidental…there is ample evidence of sacramental need in the many Arlington rituals that Mr. Poole relates in such moving detail.” —Wall Street Journal

“Vivid, compelling, filled with rich and unexpected detail, On Hallowed Ground tells the little-understood story of Arlington National Cemetery and in the process chronicles how we have honored--and sometimes dishonored--those who gambled everything on our behalf. Robert M. Poole is a fine storyteller and this is a great story.” —Geoffrey C. Ward, author of The Civil War and The War: An Intimate History 1941-1945

“Improbably gripping and often deeply moving, On Hallowed Ground chronicles both the evolution of our national cemetery and the profound ways in which treatment of the war dead reflects a nation's soul. Readers interested in political, social or military history from the Civil War on will want to read this book.” —Caroline Alexander, author of The Endurance and The War That Killed Achilles

“Most Americans, especially most historians, think they know all about Arlington Cemetery. They respect what it represents, and revere the heroes resting there. But only Robert Poole has brought to life all the historic figures, from privates to presidents, who made this national shrine and populate its rolling hills. On Hallowed Ground is a memorable combination of historical research, first-hand reporting and sensitive writing--a definitive work that should last as long as the eternal flame at John Kennedy's grave site.” —Ernest B. Furgurson, author of Freedom Rising: Washington in the Civil War

“A prism for appreciating American military sacrifice from the time of the Civil War through the present wars in Iraq and Afghanistan. Robert M. Poole not only captures the history of a venerable American institution but with it the politics of commemoration and reconciliation. Absolutely first-rate.” —Paul Dickson, co-author of The Bonus Army

“Robert Poole has coupled superb storytelling with meticulous research and produced a gem. On Hallowed Ground is by turns illuminating, informative, and enormously readable. In the future you will never think of Arlington Cemetery without recalling the tales contained in this marvelous book.” —Robert Timberg, author of The Nightingale's Song and State of Grace: A Memoir of Twilight Time

“In his stirring, evocative style, Robert Poole blends Arlington's untold story with America's own story, as Robert E. Lee's home, a prize of war in a divided nation, evolves--through wars and peace--into America's most hallowed ground.” —Thomas B. Allen, co-author of The Bonus Army