Atomic Tragedy: Henry L. Stimson and the Decision to Use the Bomb Against Japan (Paperback) 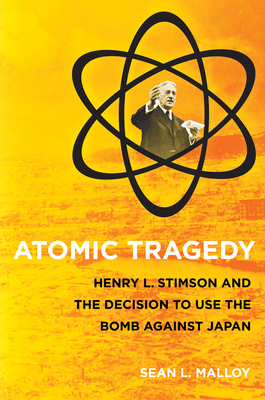 By Sean L. Malloy
Email orders@tridentbookscafe.com or call for price

Atomic Tragedy offers a unique perspective on one of the most important events of the twentieth century. As secretary of war during World War II, Henry L. Stimson (1867-1950) oversaw the American nuclear weapons program. In a book about how an experienced, principled man faltered when confronted by the tremendous challenge posed by the intersection of war, diplomacy, and technology, Sean L. Malloy examines Stimson's struggle to reconcile his responsibility for the most terrible weapon ever known in human history with his long-standing convictions about war and morality. Ultimately, Stimson's story is one of failure; despite his beliefs, Stimson reluctantly acquiesced in the use of the atomic bomb against heavily populated Japanese cities in August 1945.This is the first biography of Stimson to benefit from extensive use of papers relating to the Manhattan Project; Malloy has also uncovered evidence illustrating the origins of Stimson's commitment to eliminating or refining the conduct of war against civilians, information that makes clear the agony of Stimson's dilemma. The ultimate aim of Atomic Tragedy is not only to contribute to a greater historical understanding of the first use of nuclear weapons but also to offer lessons from the decision-making process during the years 1940-1945 that are applicable to the current world environment. As the United States mobilizes scientists and engineers to build new and supposedly more usable nuclear weapons and as nations in Asia and the Middle East are replicating the feat of the Manhattan Project physicists at Los Alamos, it is more important than ever that policymakers and analysts recognize the chain of failures surrounding the first use of those weapons at Hiroshima and Nagasaki.

Sean L. Malloy is Assistant Professor in the School of Social Sciences, Humanities and Arts at the University of California, Merced.