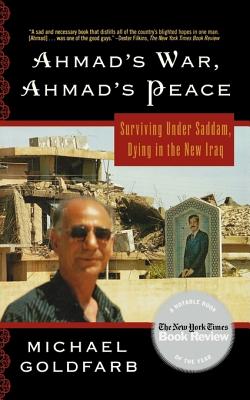 Award-winning broadcast journalist and public radio correspondent Michael Goldfarb has written the most stirring narrative to emerge from the Second Gulf War. It travels to the frontlines of battle and into the hearts of two men from different cultures whose intimate friendship and mutual passion for freedom can inspire us all. Ahmad's War, Ahmad's Peace is the author's tribute to Ahmad Shawkat, the Iraqi Kurd who served as Goldfarb's translator during "Major Combat Operations." Under an oppressive regime, Ahmad worked to promote freedom of expression. Goldfarb recounts his powerful yet all-too-brief relationship with Ahmad and introduces readers to the life of a true hero. Eighteen years old when the Ba'ath Party seized control in Iraq, Ahmad intimately and poetically describes his imprisonment and torture twice by Saddam Hussein's regime. Ahmad was banished from his hometown of Mosul for his political writings, and just as he began to taste freedom with the fall of Saddam and his large family's return home, Ahmad was murdered for publicly decrying Islamic terror in newspaper editorials that he began to publish. Ahmad's story of one heroic man will forever change our perception of what all Iraqis have suffered and continue to endure.

For almost two decades, Michael Goldfarb has been public radio's most familiar voice from London. He is currently senior correspondent for "Inside Out," the award-winning radio documentary unit of WBUR Boston. He has covered major conflicts from Bosnia to Iraq to Northern Ireland. In 2003, he was awarded broadcast journalism's highest honor, the DuPont-Columbia Award for his report "Surviving Torture." In 2005 he won the Lowell Thomas award given by the Overseas Press Club for his report, "British Jihad: Inside Out." Since September 2001, Goldfarb has reported extensively from the Middle East. His "Inside Out" documentaries are heard on more than 150 public radio stations around the country.