From Broadway to the Bowery: A History and Filmography of the Dead End Kids, Little Tough Guys, East Side Kids and Bowery Boys Films, with Cast Bio (Paperback) 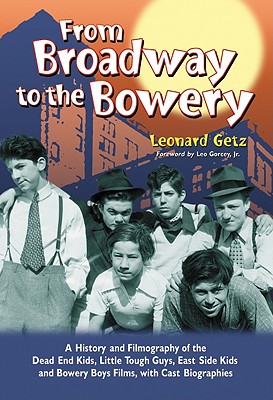 In 1935 Sidney Kingsley's play about streetwise urban kids, Dead End, opened on Broadway featuring 14 adolescent actors. For two years on Broadway and then on tour, Kingsley's play delivered its social commentary contrasting affluent neighborhoods and tenement slums on New York City's East River. The film industry picked up the story and in 1937 released Dead End which spawned 23 more years of films and serials featuring the Dead End Kids and their offshoots, Little Tough Guys, East Side Kids and the Bowery Boys. This chronicle follows the street kids through the many assorted incarnations, shifting casts and studios. First the reader is introduced to how the original play and film came about. A cast list and analysis of each production follows. For the major players, the author provides a biography and filmography, and several of these entries include a tribute from a friend or family member. Brief biographical profiles are given for other actors. Sketches of the "Dead End" revivals of 1978 and 2005 follow.

Leonard Getz CPA, lives in Philadelphia, Pennsylvania. His work has appeared in such magazines and newspapers as Lifestyles, Inside, Nostalgia Scrapbook, and Jewish Exponent. He was also an interviewer for Steven Spielberg's Oral History Foundation.