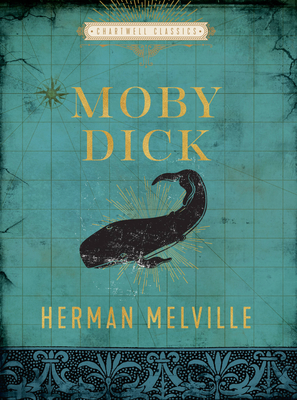 Journey to the heart of the sea with this larger-than-life classic.

Regarded as the Great American Novel, Moby Dick is the ultimate tale of seeking vengeance.

Narrated by the crew member Ishmael, this epic whaling adventure follows the crew of the Pequod, as its captain, Ahab, descends deeper and deeper into madness on his quest to find and kill the white whale that maimed him. Beyond the surface—of ship life, whaling, and the hunt for the elusive Moby Dick—are allegorical references to life, and even the universe, in this masterpiece by Herman Melville.

Complete and unabridged, this newly designed edition features an introduction by American literature scholar Christopher McBride and a timeline of the life and times of Herman Melville.

Other titles in the Chartwell Classics Series include: The Essential Tales & Poems of Edgar Allen Poe; The Essential Tales of H.P. Lovecraft; The Federalist Papers; The Inferno; The Call of the Wild and White Fang; Emma; The Odyssey; Pride and Prejudice; Grimm’s Fairy Tales; The Alchemist; The Great Gatsby; The Secret Garden; Anne of Green Gables; The Phantom of the Opera; The Communist Manifesto and Das Kapital; The Republic; Frankenstein; Twenty Thousand Leagues Under the Sea; The Picture of Dorian Gray; Meditations; Alice’s Adventures in Wonderland and Through the Looking-Glass; A Tales of Two Cities; Beowulf; The Strange Case of Dr. Jekyll and Mr. Hyde; Adventures of Huckleberry Finn; Little Women; Wuthering Heights; Peter Pan; Persuasion; Aesop’s Fables; The Constitution of the United States and Selected Writings; Crime and Punishment; Dracula; Great Expectations; The Iliad; Irish and Fairy Folk Tales; The Legend of Sleepy Hollow; The War of the Worlds; and The Time Machine and The Invisible Man.

Herman Melville was an American novelist, short story writer, and poet of the American Renaissance period. Among his best-known works are Moby Dick, Typee, and Billy Budd.

Christopher McBride holds a PhD in English from Claremont Graduate University and has taught writing and literature at a number of colleges. He writes about nineteenth- and twentieth-century American literature with an emphasis on travel writers.