A Walk on the Beach: Tales of Wisdom From an Unconventional Woman (Paperback) 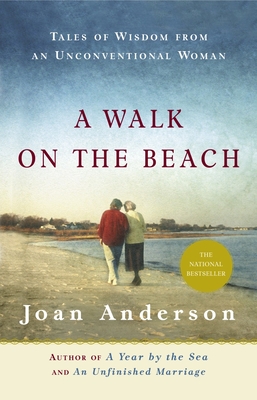 From the author of the bestselling A Year By the Sea, comes the inspiring story about how her and Joan Erikson's friendship pushed them to remember the importance of transformation and sustained them through their unique challenges.

Shortly after arriving on Cape Cod to spend a year by herself, Joan Anderson’s chance encounter with a wise and astonishing woman helped her usher in the self-discoveries that led to her ongoing renewal. First glimpsed as a slender figure on a fogged-in beach, Joan Erikson was not only a friend and confidante when she was most needed, but also a guide as Anderson stretched and grew into her unfinished self.

Joan Erikson was perhaps best known for her collaboration with her husband, Erik, a pioneering psychoanalyst and noted author. After Erik’s death, she wrote several books extending their theory of the stages of life to reflect her understanding of aging as she neared ninety-five. But her wisdom was best taught through their friendship; as she sat with Anderson, weaving tapestries of their lives with brightly colored yarn while exploring the strength gathered from their accumulated experiences, Joan Erikson’s lessons took shape on their small cardboard looms as well as in her friend’s revitalized life.

In writing about their extraordinary friendship, Anderson reveals a need she didn’t know she had: for a mentor to help navigate the transitions she faced as she grew beyond middle age. And when Joan Erikson had to face her husband’s death and the growing limitations of her own body, Anderson was able to give back some of the wisdom she had gleaned. To this poignant, joyful account, Joan Anderson brings the candor and sensitivity that have made her an acclaimed speaker and writer on midlife and its possibilities. A Walk on the Beach is an experience to savor and treasure, a glimpse of the exuberant spirit that can be sustained and passed on in all our friendships.

JOAN ANDERSON is the author of the bestsellers A Year by the Sea and An Unfinished Marriage. She has also written numerous children’s novels, including 1787, The First Thanksgiving Feast, and The American Family Farm, as well as a critically acclaimed adult nonfiction book Breaking the TV Habit (Scribner). A Walk on the Beach is her third work of narrative nonfiction. A graduate of Yale University School of Drama, Anderson lives with her husband on Cape Cod.

"In A Year by the Sea and An Unfinished Marriage, Anderson shared her account of taking a break from her marriage and spending a year of solitude at the beach. Now, she introduces the inspiring woman she befriended during that time: Joan Erikson, wife of psychoanalyst Erik Erikson. After a chance meeting in their Cape Cod town, the women found their stories--one woman was purposefully apart from her husband; the other was adjusting to her husband's deteriorating health and imminent death--resonated significantly. Erikson's enthusiasm for life prompted Anderson to re-evaluate her own marriage and her role as she aged through the life stages that were the subject of Erikson's published writing, coauthored with her famous husband. Erikson reminded Anderson of the importance of continuing to learn, grow, change and, most notably, play as one ages, to be surprised by life and where it leads. She explained, '[A]s long as we are alive, we must keep transforming ourselves.' Through the death of Erikson's husband and the return of Anderson's, readers see the women cheer each other's efforts to view the world with a fresh eye each day. While Anderson's experiences may ring familiar to readers of her earlier works, this is much more Erikson's story and philosophy, and for readers, every encounter with her is as much a treat as it was for Anderson, who wrote of her friend, 'it was [she] who made me new, or at least [she] pushed me toward the brink.'"
--Publishers Weekly

"Shortly after deciding to spend a year apart from her husband, Anderson met Joan Erikson, wife of pioneering psychoanalyst Erik Erikson, on a foggy beach on Cape Cod. The two women were at different points in their lives but struck up a friendship that helped sustain them through the challenges they faced: marital uncertainty for Anderson; the decline and imminent death of a beloved spouse for Erikson. Despite her grim prospects and advancing age, Erikson is full of life and energy and fond memories that set Anderson to wondering about the elements of marriage and friendship. Over the course of the year and for years after, the women sustain and inspire each other. After Erik's death, Joan completes their work on the stages of life. And Anderson, author of A Year by the Sea (1999) and An Unfinished Marriage (2002), finds the courage to accept changes in her own life, insights that she brings to this third book on renewal at midlife." --Booklist