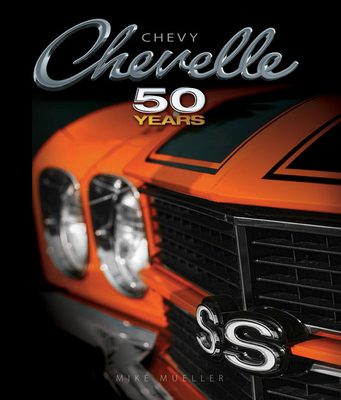 By Mike Mueller, Mark Meekins, National Chevelle Owners Association (Foreword by)
Email orders@tridentbookscafe.com or call for price
Out of Print

Chevrolet never intended the Chevelle to be a groundbreaking car. In fact, they intended it to be anything but a ground-breaking car. It may have been conventional, and it may have used old-fashioned technology, but without a doubt the Chevelle was a very, very good car--one of the best of its era.

Its body-on-frame design, though nothing radical, made it the perfect platform for harnessing the energy about to be unleashed in the coming horsepower wars. When the dust from the muscle-car era settled, the Chevelle, in LS6 form, reigned supreme as the fastest American car ever built. Its stout full-perimeter frame ensured that the car would handle all that energy and still last for the long haul.

The buying public appreciated the Chevelle's simple virtues and responded by making the car an unqualified sales success. In its first year, Chevrolet sold nearly 400,000 Chevelles, outselling the Ford Falcon by nearly 30 percent. When Chevelles disappeared for good after the 1977 model year, Chevrolet had produced over 7.2 million of them. The Chevelle was built to hold up to anything their owners could throw at them, and hold up they did.

The Chevelle had such a high survival rate that today it is one of the most common cars seen at car shows across the country--and one of the most beloved. Chevy Chevelle: Fifty Years celebrates America's half-century love affair with this iconic muscle car. Licensed with General Motors, this book showcases never-before-seen archival Chevelle photography to which Motorbooks was given unprecedented access.

Mike Mueller has worked as a freelance automotive journalist and photographer since 1991. A graduate of the University of Illinois’ journalism program, Mueller has held staff positions with Automobile Quarterly, Muscle Car Review, and Mustang Monthly. A lifelong car enthusiast, Mueller has written and provided photography for dozens of automotive books, contributed photos to Collectible Automobile, Esquire, Life,and Men’s Journal, and has written articles for Mustang Monthlyand Mustang Enthusiast. He resides in Arlington, Texas.