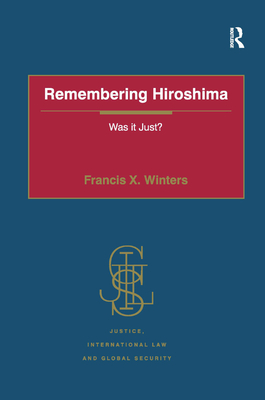 By Francis X. Winters
Email orders@tridentbookscafe.com or call for price

Taking the example of the nuclear bombing of Hiroshima as a case in point, Francis Winters analyzes the ethics of warfare, demonstrating how the examples of World War II hold relevance to the contemporary world. The volume examines the ethics of Japan's refusal to surrender and seeks to balance the verdict of responsibility for Hiroshima by extending the analysis to the ethics of the end of the war. It also illustrates how two displays of American naval and munitions power had an impact on Japan comparable to the September 11, 2001 assaults on America. Linking his study with two contemporary films on Iwo Jima, the author illustrates how the 1940s were an era of costly triumph that can still inspire national pride in American citizens. Unique in concept and approach, this volume will have relevance to scholars interested in both historical and contemporary politics, US-Japan relations as well as foreign policy and the ethics of warfare.