The Girl on the Train (Movie Tie-In) (Paperback) 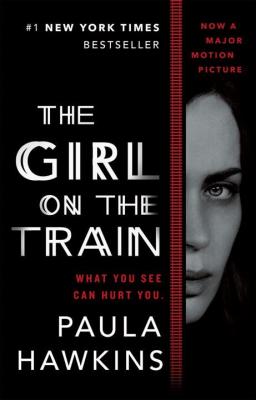 Rachel takes the same commuter train every morning and night. Every day she rattles down the track, flashes past a stretch of cozy suburban homes and stops at the signal that allows her to daily watch the same couple having breakfast on their deck. She's even started to feel like she knows them. Jess and Jason, she calls them. Their life—as she sees it—is perfect. Not unlike the life she recently lost.

And then she sees something shocking. It's only a minute until the train moves on, but it's enough. Now everything's changed. Unable to keep it to herself, Rachel goes to the police. But is she really as unreliable as they say? Soon she is deeply entangled not only in the investigation but in the lives of everyone involved. Has she done more harm than good?

Paula Hawkins worked as a journalist for fifteen years before turning her hand to fiction. The Girl on the Train is her first thriller. An international #1 bestseller, published in 50 countries and over 40 languages, it has sold over 11 million copies worldwide and has been adapted into a major motion picture starring Emily Blunt. Hawkins was born in Zimbabwe and now lives in London.

“The Girl on the Train marries movie noir with novelistic trickery. . . hang on tight. You'll be surprised by what horrors lurk around the bend.”—USA Today

“Like its train, the story blasts through the stagnation of these lives in suburban London and the reader cannot help but turn pages. . . . The welcome echoes ofRear Window throughout the story and its propulsive narrative make The Girl on the Train an absorbing read.”—The Boston Globe

“[The Girl on the Train] pulls off a thriller's toughest trick: carefully assembling everything we think we know, until it reveals the one thing we didn't see coming."—Entertainment Weekly

“Gone Girl fans will devour this psychological thriller. . . . Hawkins’s debut ends with a twist that no one—least of all its victims—could have seen coming.”—People