The Last Refuge: A True Story of War, Survival and Life Under Siege in Srebrenica (Hardcover) 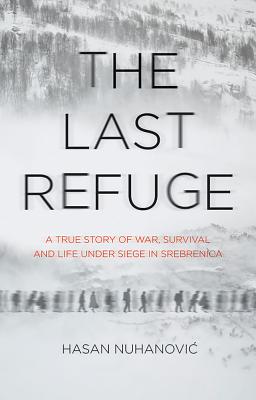 In 1992 the growing threat of Serb nationalism in Bosnia forced Hasan Nuhanovic and his family to flee their home for the safety of Bosnia's mountainous countryside. High up in the woods along the Drina River, Hasan and thousands of Bosniak refugees faced bitter nights, deprivation and death, while Serb soldiers covered their retreat with sniper fire and artillery shelling. After many months on the move, the Bosniaks battled their way to the town of Srebrenica, their last refuge, under the charge of a small UN force. When the Bosnian-Serb army laid siege to the town, Hasan’s life once more became a daily struggle for survival, battling starvation, sniping and shelling. This book is a powerful first-hand account of the barbarism of those years leading up to the massacre in Srebrenica; it is also an action-packed, gripping true story of struggle, survival and heroism.

Hasan Nuhanovic is a high-profile writer and campaigner for the victims of the Srebrenica genocide in the Bosnian Wars of 1992–95. During the war he offered his services to UN troops as an interpreter. His employment with the Dutch Battalion meant he was saved from the massacre, while his family were taken away by Serbian soldiers and killed along with 8,000 other Bosniaks. A tireless campaigner for justice, in 2008 he brought a civil case against The Netherlands for its role in the massacre. In 2013 the Supreme Court of the Netherlands ruled in favor of Nuhanovic, setting a precedent in international law.