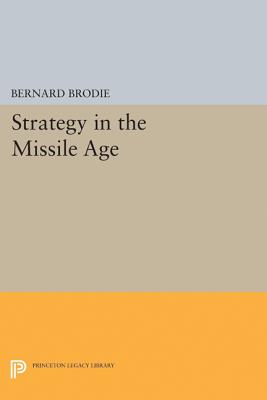 Strategy in the Missile Age first reviews the development of modern military strategy to World War II, giving the reader a reference point for the radical rethinking that follows, as Dr. Brodie considers the problems of the Strategic Air Command, of civil defense, of limited war, of counterforce or pre-emptive strategies, of city-busting, of missile bases in Europe, and so on. The book, unlike so many on modern military affairs, does not present a program or defend a policy, nor is it a brief for any one of the armed services. It is a balanced analysis of the requirements of strength for the 1960's, including especially the military posture necessary to prevent war. A unique feature is the discussion of the problem of the cost of preparedness in relation to the requirements of the national economy, so often neglected by other military thinkers.

Originally published in 1959. The Princeton Legacy Library uses the latest print-on-demand technology to again make available previously out-of-print books from the distinguished backlist of Princeton University Press. These editions preserve the original texts of these important books while presenting them in durable paperback and hardcover editions. The goal of the Princeton Legacy Library is to vastly increase access to the rich scholarly heritage found in the thousands of books published by Princeton University Press since its founding in 1905.