The Celery Stalks At Midnight (Bunnicula and Friends) (Hardcover) 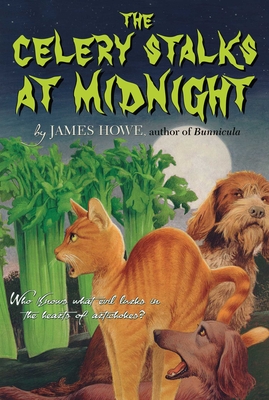 This is book number 1 in the Bunnicula and Friends series.

CHESTER, the cat, Harold, the dog, Bunnicula, the vampire (?) rabbit, and Howie, the wirehaired dachshund puppy, return in this sequel to Bunnicula: A Rabbit Tale of Mystery and Howliday Inn to ask the question: Who knows what evil lurks in the hearts of lettuce?
Chester has just finished retelling the tale of Bunnicula to Howie, who has just joined the Monroe family, when he discovers that Bunnicula is missing from his cage. Chester stays up all night worrying. What becomes of the vegetables Bunnicula attacks (for he is after all a vegetarian vampire)? Do they become vampire veggies serving their master's evil ways? Certain that the town is crawling with killer parsnips and homicidal heads of lettuce, Chester sets out with Harold and Howie and a box of toothpicks for spearing the little devils through the heart.
En route to finding Bunnicula, driving tiny stakes through whatever white vegetables lie in their paths and thereby saving the town of Centerville, the threesome have more than their share of adventures, including an encounter with an ill-tempered white cat named Snowball and an unexpected trip to the town dump.
Finally the strange actions of everyone in town, including Toby and Pete Monroe, convince Chester that he may be too late, that Bunnicula and his minion vegetables may have taken over the town. Chester and his merry band race to save what souls they can. But, of course, Chester has been known to be wrong before.