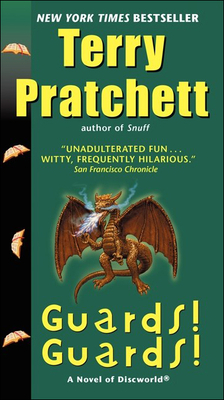 An excellent jumping off point for Terry Pratchett's prolific Discworld series! In this book we follow Sam Vimes and the City Watch as they attempt to solve a mystery and save the city of Ankh-Morpork. Pratchett's writing is witty and poignant, culminating in a story you won't be able to put down!

Long believed extinct, a superb specimenof draco nobilis ("noble dragon") has appeared in Discworld's greatest city. Not only does this unwelcome visitor have a nasty habit of charbroiling everything in its path, in rather short order it is crowned King.

Meanwhile, back at Unseen University, an ancient and long-forgotten volume--The Summoning Dragons--is missing from the Library's shelves. To the rescue come Captain Vimes, Constable Carrot, and the rest of the Night Watch who, along with other brave citizens, risk everything, including a good roasting, to dethrone the flying monarchand restore order to Ankh-Morpork(before it's burned to a crisp).

TERRY PRATCHETT is one of the most popular authors writing today. He lives behind a keyboard in Wiltshire and says he 'doesn't want to get a life, because it feels as though he's trying to lead three already'. He was appointed OBE in 1998. He is the author of the phenomenally successful Discworld series and his trilogy for young readers, The Bromeliad, is scheduled to be adapted into a spectacular animated movie. His first Discworld novel for children, "The Amazing Maurice and His Educated Rodents," was awarded the 2001 Carnegie Medal.