Sentence: Ten Years and a Thousand Books in Prison (Hardcover) 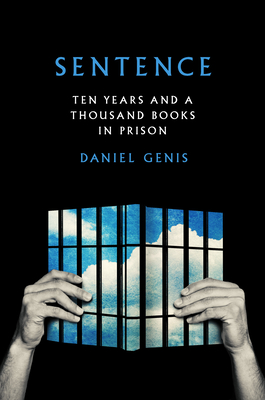 In 2003 Daniel Genis, the son of a famous Soviet émigré writer, broadcaster, and culture critic, was fresh out of NYU when he faced a serious heroin addiction that led him into debt and ultimately crime. After he was arrested for robbing people at knifepoint, he was nicknamed the “Apologetic Bandit” in the press, given his habit of expressing regret to his victims as he took their cash. He was sentenced to twelve years—ten with good behavior, a decade he survived by reading 1,046 books, taking up weightlifting, having philosophical discussions with his fellow inmates, working at a series of prison jobs, and in general observing an existence for which nothing in his life had prepared him.

Genis describes in unsparing and vivid detail the realities of daily life in the New York penal system. In his journey from Rikers Island and through a series of upstate institutions, he encounters violence on an almost daily basis, while learning about the social strata of gangs, the “court” system that sets geographic boundaries in prison yards, how sex was obtained, the workings of the black market in drugs and more practical goods, the inventiveness required for everyday tasks such as cooking, and how debilitating solitary confinement actually is—all while trying to preserve his relationship with his wife, whom he recently married.

Written with empathy and wit, Sentence is a strikingly powerful memoir of the brutalities of prison and how one man survived them, leaving its walls with this book inside him, “one made of pain and fear and laughter and lots of other books.”

Daniel Genis was born in New York City and graduated from NYU with degrees in history and French. He has worked as a translator and has written for Newsweek, The Daily Beast, The Paris Review, The Washington Post, Vice, Deadspin, Süddeutsche Zeitung, The Guardian, and the New York Daily News.

"An enjoyably pungent read from the outset. . . . Genis is a splendidly wry and enjoyable tour guide to hell in his capacity as prisoner 04A3328. . . . There is much dark humor, sometimes painfully so, from the disparity between the high-minded intellectualism that the author espouses—Proust, Dostoyevsky and Solzhenitsyn are not so much namechecked as wielded—and the scatological grimness of the environment depicted herein. Genis has an affinity for the knotty phrase. . . . His stated intent—to educate his reader as to the insanity and inhumanity of the contemporary American penal experience—is fulfilled admirably over the course of Sentence. . . . Genis has the comic skill of early Woody Allen at describing the indignities and challenges that he, an educated upper-middle-class Jewish man, faced inside, and there are endless throwaway details that provoke wild laughter. . . . Going by the stories within this angrily hilarious book, the United States penal system has a phenomenal amount to answer for."
—Alexander Larman, Spectator World

"Combine the clean prose of Hemingway, the urban drug tales of William S. Burroughs, and sensibilities of the New York Review of Books and you have a good idea of what you’ll get from Sentence. . . . This fresh angle gives the book real momentum and a kinetic energy. Mr. Genis is also very funny."
—The New York Sun

"A man does hard time with the help of literature in this striking and soulful debut. . . . By turns harrowing and mordantly funny, Genis’s account illuminates how the written word helps humanity endure in the stoniest soil."
—Publishers Weekly (starred review)

“[A] sharp, wry memoir. . . . The author’s voice is insightful, candid, and sometimes darkly humorous. A vivid portrait of endurance behind bars.”
—Kirkus Reviews

"Genis was condemned to 10 years confinement in America’s top security prisons for demanding money from shopkeepers to support his heroin habit. His instrument of persuasion was a dysfunctional penknife. Brilliant, sensitive, Russian and Jewish, he may have been America’s most erudite prisoner. His memoir is no attention-grabbing horror story, it is an incredibly detailed and mind-blowing record of a journey through hell. Like his hero Dostoevsky, he organizes his record by subject and tells us, without a single lurid adjective, exactly how it is in the House of the Dead."
—John Burdett, internationally bestselling author of the Bangkok 8 series

"In combining threads of immigration and incarceration, Daniel Genis has written a brave and uniquely American book."
—Gary Shteyngart, author of Our County Friends and Super Sad True Love Story

"Daniel Genis’s Sentence is an immensely engaging book, full of dark humor and stunning insights on being incarcerated, but it’s true power lies in the profound depiction of one man’s quest to understand what this country is all about and find his identity and place in the world."
—Lara Vapnyar, New York Times bestselling author of Divide Me By Zero and other novels