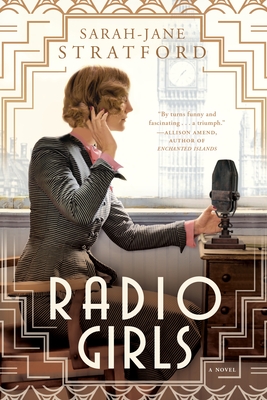 The Great War is over, and change is in the air, in this novel that brings to life the exciting days of early British radio…and one woman who finds her voice while working alongside the brilliant women and men of the BBC.

London, 1926. American-raised Maisie Musgrave is thrilled to land a job as a secretary at the upstart British Broadcasting Corporation, whose use of radio—still new, strange, and electrifying—is captivating the nation. But the hectic pace, smart young staff, and intimidating bosses only add to Maisie’s insecurity.

Soon, she is seduced by the work—gaining confidence as she arranges broadcasts by the most famous writers, scientists, and politicians in Britain. She is also caught up in a growing conflict between her two bosses, John Reith, the formidable Director-General of the BBC, and Hilda Matheson, the extraordinary director of the hugely popular Talks programming, who each have very different visions of what radio should be. Under Hilda’s tutelage, Maisie discovers her talent, passion, and ambition. But when she unearths a shocking conspiracy, she and Hilda join forces to make their voices heard both on and off the air…and then face the dangerous consequences of telling the truth for a living.

Sarah-Jane Stratford is an author and essayist who has written for the Guardian, Boston Globe, Los Angeles Review of Books, Slate, Salon, and Guernica, among others. She is also a member of WAM! (Women, Action, and the Media).

“If the early days of the BBC sound like a recipe for hitting the snooze button, think again. Sarah-Jane Stratford’s crackerjack historical novel Radio Girls smartly tunes in to the beginnings of Britain's broadcasting behemoth....Radio Girls is a hit.”—USAToday.com

“Sarah-Jane Stratford’s Radio Girls is an achievement of historical fiction so believable that you’ll wonder if the author has access to a time machine. Maisie’s trajectory—from mousey, fearful underling into assertive, independent powerhouse—mirrors that of the nascent BBC for which she works. The promise of post-war prosperity and the looming threat of fascism make for an engrossing background against which Maisie finds herself involved in international intrigue and national rights movements which will make the reader turn the pages frantically, utterly enthralled until the very end. By turns funny and fascinating, Radio Girls is a triumph.”—Allison Amend, Author of Enchanted Islands

“Radio Girls carries readers on a memorable, eye-opening journey to London in the 1920s and ’30s, a pivotal time in the history of women’s rights, politics, and the arts. Sarah-Jane Stratford’s storytelling skills are on vivid display throughout, and the strong, believable, and immensely human Maisie Musgrave is the best imaginable guide to that vanished time and place.”—Joseph Wallace, Author of Slavemakers

“A bright, appealing novel about the early days of the BBC and the women behind its brilliant programming....[The] depiction of female friendship and support is one of the great strengths of Stratford’s novel, which so capably describes its characters’ thirst for knowledge, for information of all kinds. An intoxicating look inside a world of innovative new media.”—Kirkus Reviews

“A delightfully literary historical fiction book about the early days of the BBC.”—Broadly

“A highly detailed narrative and well-fleshed characters set the stage for this unique, early 20th-century story...This is an eye-opening view of the world when women’s rights were newly budding.”—Historical Novels Review