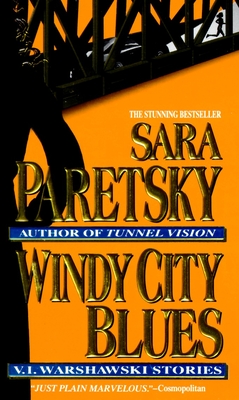 V.I. Warshawski, “undoubtedly one of the best-written characters in mystery fiction” (The Baltimore Sun), returns in a collection of stories that bring new meaning to “ties that bind.” Decked out in her silk shirts and no-nonsense Attitude, V.I. is out to make a living—by the skin of her teeth.

In “Grace Notes,” V.I. has barely finished her morning coffee when she sees an ad in the paper asking for information about her own mother, long dead.  The paper leads V.I. to her newfound Italian cousin Vico, who’s looking for music composed by their great-grandmother.  What’s the score?  Clearly it’s something to kill for. . . .

“The Pietro Andromache” finds V.I.’s friend Dr. Lotty Herschel with motive and means to dispatch her professional rival and steal his priceless statue.  Lotty didn’t do it—but does she know who did?  V.I. soon cuts to the art of the case—and it’s not a pretty picture at all!

Summoned by an old high school friend to a race “At the Old Swimming Hole,” V.I. ends up swimming with the sharks—the FBI and a ruthless gambling kingpin—in a pool of blood. . . . And it’s only “Skin Deep” when a relaxing facial transformation transforms a client into a stiff.  V.I.’s pal Sal needs help.  Her beautician sister Evangeline is prime suspect—and V.I. has only eighteen hours to crack the case before it’s headline news. . . .

“Three-Dot Po” proves there’s nothing like a dog.  Especially a dog on the trail of her mistress’s killer, with V.I. in tow. . . .

In “Strung Out,” love means nothing and V.I.’s quick to learn the score as her old friend’s tennis-champion daughter is under suspicion for strangling her father with a racket string.  And there’s more, nine stories in all, in this masterful collection of short fiction starring V.I. Warshawski, “the most engaging woman in detective fiction since Dorothy Sayers’s Harriet Vane” (Newsweek).

“The best on the beat? V.I. Warshawski [is] the top of the line.”—Chicago Tribune

“What really continues to amaze and impress about this series is V.I. herself, undoubtedly one of the best-written characters in mystery fiction.”—The Baltimore Sun

“Parentsky’s work does more than turn a genre upside down: Her books are beautifully paced and plotted. . . . The dialogue is fresh and smart.”—Newsweek