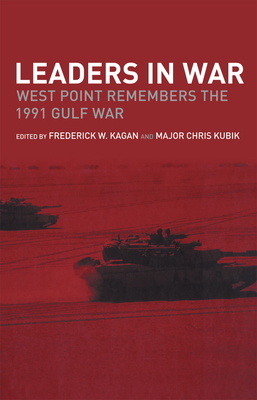 By Frederick W. Kagan (Editor), Christian Kubik (Editor)
Not currently in store. Available to ship from distributor's warehouse.
(This book cannot be returned.)

Leaders in War present unique first-person perspectives across the spectrum of American combat operations during the 1991 Persian Gulf War.

From division commanders to platoon leaders, the authors deliver an insider's view of tough leadership challenges, tragic failures, and triumphant victories. Leaders in War captures the essence of the post-Cold War US Army: how an all-volunteer army, equipped with new weapons systems and adjusting to new battle doctrine, mounted one of history's most successful military campaigns.

Described here are the details of the tremendous logistical challenges, innovations in intelligence, ground combat operations from platoon to division, and a wide range of combat support operations. Leaders in War focuses not just on the successes, but on the failures as well, in operations ranging from violent tank battles against the vaunted Iraqi Republican Guard to train-and-fill operations thousands of miles away. Leaders in War illustrates how US Army leaders adapted to the psychological strains of combat, the fog of war, unforeseeable challenges, and the fury of tank warfare during the Persian Gulf War.

Dr. Kagan is Associate Professor of Military History at the US Military Academy at West Point, NY. He has written extensively in the fields of military history and current American military policy including While America Sleeps: Self-Delusion, Military Weakness, and the Threat to Peace Today, (co-authored with Donald Kagan), St. Martin's Press, 2000; The Military History of Tsarist Russian and The Military History of the Soviet Union (co-edited with Robin Higham), Palgrave, 2002; and The Military Reforms of Nicholas I: The Origins of the Modern Russian Army, St. Martin's Press, 1999. He has also written extensively in The Wall Street Journal, Commentary, The Weekly Standard, and elsewhere. Major Kubik has spent more than two decades as a leader in the US Army. Enlisting in 1982, he served as a team leader, squad leader, and platoon sergeant in the Republic of Panama and in the USA. After commissioning, he served as a platoon leader in the Persian Gulf War and as a company commander in Croatia / Bosnia. He earned his Masters Degree in English at the University of Virginia and is currently an Assistant Professor of English at the US Military Academy, West Point, NY.