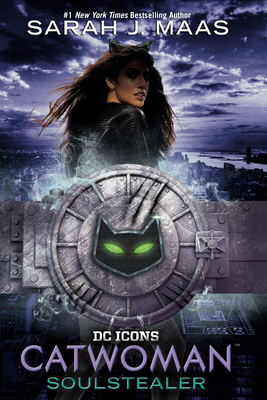 When the Bat's away, the Cat will play. It's time to see how many lives this cat really has.

Two years after escaping Gotham City's slums, Selina Kyle returns as the mysterious and wealthy Holly Vanderhees. She quickly discovers that with Batman off on a vital mission, the city looks ripe for the taking.

Meanwhile, Luke Fox wants to prove that as Batwing he has what it takes to help people. He targets a new thief on the prowl who has teamed up with Poison Ivy and Harley Quinn. Together, they are wreaking havoc. This Catwoman is clever—she may be Batwing's undoing.

In this third DC Icons book, Selina is playing a desperate game of cat and mouse, forming unexpected friendships and entangling herself with Batwing by night and her devilishly handsome neighbor Luke Fox by day. But with a dangerous threat from the past on her tail, will she be able to pull off the heist that's closest to her heart?

"Maas has a gift for crafting fierce female protagonists. . . . An epic shoutout to all the bad girls who know how to have fun."
—Kirkus Reviews, STARRED REVIEW

"A Catwoman story unlike anything you've seen before." --Nerdist

Sarah J. Maas is the #1 New York Times bestselling author of the Throne of Glass series and the Court of Thorns and Roses series, as well as a USA Today bestselling author. Sarah wrote the first incarnation of the Throne of Glass series when she was just sixteen; it has now sold in thirty-six languages. A New York native, Sarah lives in Pennsylvania with her husband and her dog. She is also an author in the DC Icons series, a collection of books in which the DC Comics super hero icons are written by megastar young adult authors. The series also includes Wonder Woman: Warbringer by Leigh Bardugo, Batman: Nightwalker by Marie Lu, and Superman: Dawnbreaker by Matt de la Peña. Visit Sarah online at sarahjmaas.com and follow her on Instagram at @therealsjmaas.

"Maas has a gift for crafting fierce female protagonists. . . . An epic shoutout to all the bad girls who know how to have fun." —Kirkus Reviews, STARRED REVIEW

"Selina is a flawed, complex, character. . . . [and] diverse characters are featured throughout. . . . The story starts out gritty, becoming less so as it unfurls, but readers will not forget where Selina started." —Booklist

"Feminism is the invisible jet powering this literary revamp of the Amazon princess."
—The New York Times Book Review (for Wonder Woman: Warbringer by Leigh Bardugo)

"Cinematic battles and a race against time keep the excitement high, but the focus on girls looking out for each other is what makes this tie-in shine."
—Kirkus Reviews, STARRED REVIEW (for Wonder Woman: Warbringer by Leigh Bardugo)

"All readers will definitely be delighted by Bardugo's cinematic delivery and long for more stories about this epic, ass-kicking heroine."
—VOYA, STARRED REVIEW (for Wonder Woman: Warbringer by Leigh Bardugo)

"A fast-paced story line, action-packed fight sequences, and hi-tech gadgetry expected from any Batman story make this a fun read with wide appeal."
—SLJ (for Batman: Nightwalker by Marie Lu)

"The trickiest aspect of any Batman narrative is getting into Bruce Wayne's head, and [Lu] doesn't miss a beat." —Kirkus Reviews (for Batman: Nightwalker by Marie Lu)

"Masterful. . . . A great story for any Dark Knight fan."
—Den of Geek (for Batman: Nightwalker by Marie Lu)