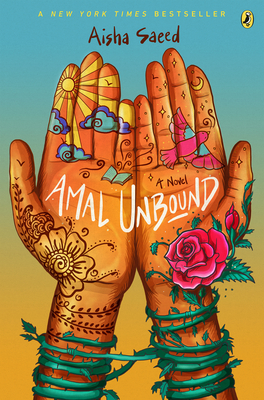 Amal has big dreams, until a nightmarish encounter . . .

Twelve-year-old Amal's dream of becoming a teacher one day is dashed in an instant when she accidentally insults a member of her Pakistani village's ruling family. As punishment for her behavior, she is forced to leave her heartbroken family behind and go work at their estate.

Amal is distraught but has faced setbacks before. So she summons her courage and begins navigating the complex rules of life as a servant, with all its attendant jealousies and pecking-order woes. Most troubling, though, is Amal's increasing awareness of the deadly measures the Khan family will go to in order to stay in control. It's clear that their hold over her village will never loosen as long as everyone is too afraid to challenge them--so if Amal is to have any chance of ensuring her loved ones' safety and winning back her freedom, she must find a way to work with the other servants to make it happen.

Aisha Saeed also wrote Written in the Stars, and is a Pakistani-American writer, teacher, and attorney. She has been featured on MTV, the Huffington Post, NBC and the BBC, and her writings have appeared in publications including the journal ALAN and the Orlando Sentinel. As one of the founding members of the much talked about We Need Diverse Books Campaign, she is helping change the conversation about diverse books. Aisha lives in Atlanta, Georgia, with her husband and sons.

* “Saeed (Written in the Stars) infuses this true-to-life story of unjust power dynamics in a poor Pakistani village with a palpable sense of dread regarding the fate of the inquisitive, industrious, poetry-loving titular character. . . . Amal’s experience navigating an unfamiliar social hierarchy in the landlord’s lavish estate exposes her to pervasive gender inequities and unfair labor practices. . . . Saeed’s eloquent, suspenseful, eye-opening tale offers a window into the contemporary practice of indentured servitude and makes a compelling case for the power of girls’ education to transform systemic injustice.”—Publishers Weekly, starred review

* “A Pakistani girl’s dreams of an education dissolve when she is forced into indentured servitude. . . . Amal narrates, her passion for learning, love for her family, and despair at her circumstance evoked with sympathy and clarity, as is the setting. Inspired by Malala Yousafzai and countless unknown girls like her, Saeed’s timely and stirring middle-grade debut is a celebration of resistance and justice.”—Kirkus Reviews, starred review

* "This beautifully crafted and moving story will encourage middle grade readers to ponder such issues as indentured servitude, class, and resistance. Saeed’s well-developed narrative will evoke empathy for all those around the world like Amal, who are not guaranteed freedom or education. An inspired read for all, particularly for those who have followed Malala Yousafzai’s story or enjoyed Deborah Ellis’ The Breadwinner or Tara Sullivan’s The Bitter Side of Sweet."—School Library Connection, starred review

“Readers will find that a little perseverance and a heart filled with hope can eventually surmount a harsh reality. Saeed fills her prose with lush descriptions of Pakistani life, while still managing to connect with readers whose surroundings and experiences will be starkly different. Hand to any reader who struggles with definitive gender roles, norms, and expectations held in place by societal structures.”—Booklist

“This simple yet lyrical novel paints an evocative picture of life in a small village in modern-day Pakistan, especially the limits placed on girls and women. . . . It may serve as a read-alike or a gateway to stories such as Yousafzai’s autobiography, I Am Malala; The Lines We Cross by Randa Abdel-Fattah; and Saeed’s debut novel, Written in the Stars.”—The Voice of Youth Advocates

“Amal’s narration is straightforward and direct, and her despair at losing her dreams is palpable, as is her unflagging determination to get them back. . . . There’s clear commentary on the marginalized lives of girls and women in Pakistan . . . and the fight for her education is already fraught even before she is taken from her home. An author’s note discusses the issues of indentured servitude, particularly among girls.”—The Bulletin of the Center for Children's Books

“This heart-wrenching yet hopeful contemporary novel about class, gender, and literacy features a narrator who takes great risks in the name of justice and self-determination. . . . Short chapters and unadorned prose make the story accessible and direct, with Amal’s emotions, perspective, and strength anchoring the narrative. An author’s note asserts that Amal represents real women and girls who fight injustice across the globe, often without recognition.”—Horn Book