Nuclear Disaster in the Urals (Paperback) 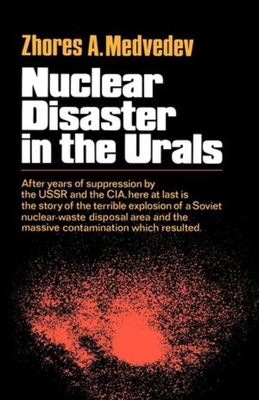 Late in 1957 a huge explosion occurred in the disposal section of the Soviet atomic weapons industry located in the Southern Urals where atomic wastes had been stored for over ten years. The result was devastating. The primary radioactive contamination covered between 800 and 1200 square miles, an area almost as large as Rhode Island. People died--whole villages had to be evacuated and bulldozed. All that remained, both plant and animal life, received such a massive dose of radiation that its effects will probably be felt for as long as a century.

The story of the explosion and contamination was and still is suppressed in the Soviet Union and, the author contends, by the CIA and other Western intelligence organizations fearful of public resistance to nuclear power plants. Now, after an intensive study of Soviet scientific articles (written to disguise the fact that they were about the Ural explosion) and after many interviews and reports from friends in the scientific community as well as from witnesses, the author has pieced together the story of what actually happened. He analyzes the extent and consequences of the contamination and draws forbidding conclusions about the possibility of similar disasters in the rest of the world.

Zhores Medvedev (1925—2018) was a Russian agronomist, biologist, historian, and dissident. He was the author of numerous books including Nuclear Disaster in the Urals, Legacy of Chernobyl, and Khrushchev: The Years in Power.