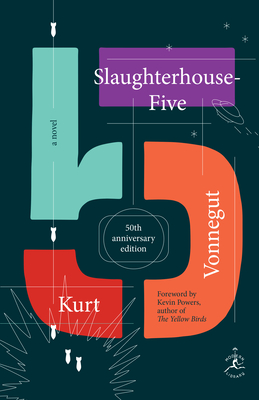 Slaughterhouse-Five, an American classic, is one of the world’s great antiwar books. Centering on the infamous World War II firebombing of Dresden, the novel is the result of what Kurt Vonnegut described as a twenty-three-year struggle to write a book about what he had witnessed as an American prisoner of war. It combines historical fiction, science fiction, autobiography, and satire in an account of the life of Billy Pilgrim, a barber’s son turned draftee turned optometrist turned alien abductee. As Vonnegut had, Billy experiences the destruction of Dresden as a POW. Unlike Vonnegut, he experiences time travel, or coming “unstuck in time.”

An instant bestseller, Slaughterhouse-Five made Kurt Vonnegut a cult hero in American literature, a reputation that only strengthened over time, despite his being banned and censored by some libraries and schools for content and language. But it was precisely those elements of Vonnegut’s writing—the political edginess, the genre-bending inventiveness, the frank violence, the transgressive wit—that have inspired generations of readers not just to look differently at the world around them but to find the confidence to say something about it. Authors as wide-ranging as Norman Mailer, John Irving, Michael Crichton, Tim O’Brien, Margaret Atwood, Elizabeth Strout, David Sedaris, Jennifer Egan, and J. K. Rowling have all found inspiration in Vonnegut’s words. Jonathan Safran Foer has described Vonnegut as “the kind of writer who made people—young people especially—want to write.” George Saunders has declared Vonnegut to be “the great, urgent, passionate American writer of our century, who offers us . . . a model of the kind of compassionate thinking that might yet save us from ourselves.”

More than fifty years after its initial publication at the height of the Vietnam War, Vonnegut’s portrayal of political disillusionment, PTSD, and postwar anxiety feels as relevant, darkly humorous, and profoundly affecting as ever, an enduring beacon through our own era’s uncertainties.

Kurt Vonnegut’s humor, satiric voice, and incomparable imagination first captured America’s attention in The Sirens of Titan in 1959 and established him as “a true artist” (The New York Times) with Cat’s Cradle in 1963. He was, as Graham Greene declared, “one of the best living American writers.” Mr. Vonnegut passed away in April 2007.

“Poignant and hilarious, threaded with compassion and, behind everything, the cataract of a thundering moral statement.”—The Boston Globe

“Splendid . . . a funny book at which you are not permitted to laugh, a sad book without tears.”—Life

“Funny, satirical, compelling, outrageous, fanciful, mordant, fecund . . .  ‘It’s too good to be science fiction,’ [the critics] would say. But Vonnegut doesn’t care, and you won’t care, either, because this is a writer who leaps over genres.”—Los Angeles Times