Confessions of a Fairy's Daughter: Growing Up with a Gay Dad (Paperback) 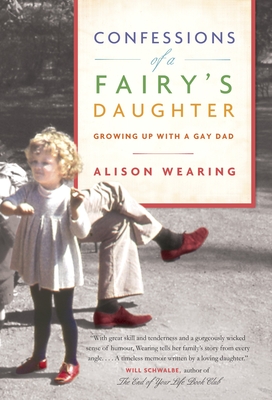 NATIONAL BESTSELLER (The Globe and Mail)

A moving memoir about growing up with a gay father in the 1980s, and a tribute to the power of truth, humour, acceptance and familial love. A true "It GOT Better" story.

Alison Wearing led a largely carefree childhood until she learned, at the age of 12, that her family was a little more complex than she had realized. Sure her father had always been unusual compared to the other dads in the neighbourhood: he loved to bake croissants, wear silk pyjamas around the house, and skip down the street singing songs from Gilbert and Sullivan operettas. But when he came out of the closet in the 1970s, when homosexuality was still a cardinal taboo, it was a shock to everyone in the quiet community of Peterborough, Ontario—especially to his wife and three children.

Alison’s father was a professor of political science and amateur choral conductor, her mother was an accomplished pianist and marathon runner, and together they had fed the family a steady diet of arts, adventures, mishaps, normal frustrations and inexhaustible laughter. Yet despite these agreeable circumstances, Joe’s internal life was haunted by conflicting desires. As he began to explore and understand the truth about himself, he became determined to find a way to live both as a gay man and also a devoted father, something almost unheard of at the time. Through extraordinary excerpts from his own letters and journals from the years of his coming out, we read of Joe’s private struggle to make sense and beauty of his life, to take inspiration from an evolving society and become part of the vanguard of the gay revolution in Canada.

Confessions of a Fairy’s Daughter is also the story of “coming out” as the daughter of a gay father. Already wrestling with an adolescent’s search for identity when her father came out of the closet, Alison promptly “went in,” concealing his sexual orientation from her friends and spinning extravagant stories about all of the “great straight things” they did together. Over time, Alison came to see that life with her father was surprisingly interesting and entertaining, even oddly inspiring, and in fact, there was nothing to hide.

Balancing intimacy, history and downright hilarity, Confessions of a Fairy’s Daughter is a captivating tale of family life: deliciously imperfect, riotously challenging, and full of life’s great lessons in love. Alison brings her story to life with a skillfully light touch in this warm, heartfelt and revelatory memoir.

ALISON WEARING's first book was the bestselling, internationally acclaimed travel memoir Honeymoon in Purdah: An Iranian Journey. Since then, she has dedicated herself to music, dance and theatre, and her original one-woman shows, including a stage adaptation of Confessions of a Fairy's Daughter, have won awards across the country. She lives in Stratford, Ontario.


“Truth—even when it was brutal when first disclosed more than thirty years ago—becomes an interesting story with time. It becomes art that engages people; that makes them laugh; that resonates with their own untold stories. It can heal.... In Confessions of a Fairy’s Daughter, Wearing deftly picks apart the complex knots of family—the love, the adventure, the myth, the hurt, the betrayal.”
—Sarah Hampson, The Globe and Mail

“A loving tribute to [Wearing’s] dad and a touching coming-of-age story in and of itself.... A tenderly honest and notably humorous account.”
—Winnipeg Free Press

“Part memoir, part history book, part diary and all parts heart. Alison Wearing weaves a tale that celebrates the complexities of who we are and the families we hold close. Confessions of a Fairy’s Daughter is painful, tender, poignant and—most important—beautifully honest.”
—Brian Francis, author of Natural Order

“This exquisitely written and deeply compassionate memoir tells the story of a family and a nation at a turning point in their sexual and political awakening. The scope of events and emotions may be operatic, but Alison Wearing captures them all in details that are intimate yet revealing, heartbreaking yet joyous. This is a book for every daughter who loves her father and for everyone who chooses to live (and love) openly and freely.”
—Kamal Al-Solaylee, author of Intolerable: A Memoir of Extremes

“Confessions of a Fairy’s Daughter is a universally appealing memoir about everything that matters in a family and to a person. It will appeal to you if you have a gay parent or a straight parent or any parent. If you have a child or were once a child. If you are passionately interested in social history or all you really want is a compelling, beautifully written story with just the right mix of everything—compassion, discovery, recovery, the occasional (OK, on one occasion) accidental ingestion of hallucinogens on Christmas Day, music, humour, grace.”
—Jamie Zeppa, author of Every Time We Say Goodbye and Beyond the Sky and the Earth

“Confessions of a Fairy’s Daughter had me in tears: first of laughter, then of sadness, then of wonder at life’s strange and marvelous fragility. It is a book both beautiful and true; about the longing for family and for home. Alison Wearing is a hugely talented writer.”
—Alison Pick, author of the Man Booker Prize–nominated Far to Go

“With great skill and tenderness and a gorgeously wicked sense of humor, Alison Wearing tells her family’s story from every angle, allowing all to speak with their own voices. This is an important historical document—a portrait of gay life in the 1980s with its bravely fought battles for equality—that doesn’t flinch from showing the collateral damage of homophobia, which still today affects and afflicts the families of so many who are struggling to come out. But it’s also a timeless memoir written by a loving daughter who is finding her own way in the world and learning about the need we all have not just for acceptance, but for true understanding.”
—Will Schwalbe, author of The End of Your Life Book Club

“Alison Wearing is blessed with the eye of a lyric poet, the ear of a comic novelist, and a heart capacious enough to tell a complicated love story. Confessions of a Fairy’s Daughter caught me from the beginning and held me until its touching conclusion.”
—Katherine Ashenburg, author of The Dirt on Clean and The Mourner’s Dance