The Book Lover's Cookbook: Recipes Inspired by Celebrated Works of Literature, and the Passages That Feature Them (Paperback) 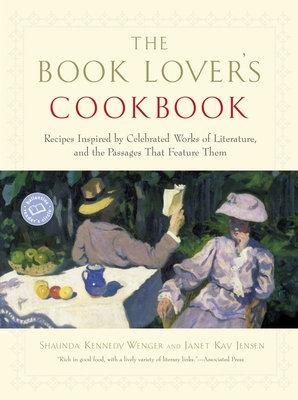 After relishing appetizers and entrees, there’s a dazzling array of desserts, including Carrot Pudding (Charles Dickens’s A Christmas Carol); Effie Belle’s Coconut Cake (Olive Ann Burns’s Cold Sassy Tree); and the kids will love C.S. Lewis's Turkish Delight from The Lion, The Witch, and the Wardrobe.

Sprinkled throughout with marvelous anecdotes about writers and writing, The Book Lover’s Cookbook is a culinary and literary delight, a browser’s cornucopia of reading pleasure, and a true inspiration in the kitchen.

TASTY RECIPES AND THE BOOKS THAT INSPIRED THEM

. . . and many other delectable dishes for the literary palate!

Shaunda Kennedy Wenger is the author of ten books, including the cookbook From Rivets and Rails: Recipes of a Railroad Boarding House. Her first book, The Book Lover's Cookbook: Recipes Inspired by Celebrated Works of Literature, and the Passages That Feature Them, was an NPR holiday gift pick. In 2010, she started her own publishing company, Essemkay Company Productions, where she released an award-winning chapter book for young readers called Little Red Riding Hood: Into the Forest Again. Her stories, articles, and poems have appeared in numerous publications, including Babybug and Cricket magazines. She lives in Utah with her children.

Janet Jensen is the co-author of a literature-based cookbook, The Book Lover’s Cookbook: Recipes Inspired by Great Works of Literature, and the Passages that Feature Them, and a novel, Don’t You Marry the Mormon Boys, which won a gold medal for Cultural Fiction in the Readers' Favorite International Book Awards Contest. Her work can also be found in Parables for Today and Gruff Variations. Her essay "Baking Day" placed second in the 2011 memoir contest sponsored by The Writer magazine and Gotham Writers Workshops. She and her husband, Miles, live in a college town nestled in the foothills of the northern edge of the Wasatch Mountains in Utah.

“Rich in good food with a lively variety of literary links.”
–Associated Press

“Add a delectable new element to your next book club gathering.”
–Trenton Times

“A cornucopia of authors who have a knack for getting the salivary glands going. . . . you’re sure to find something to satisfy the senses.”
–Chicago Tribune