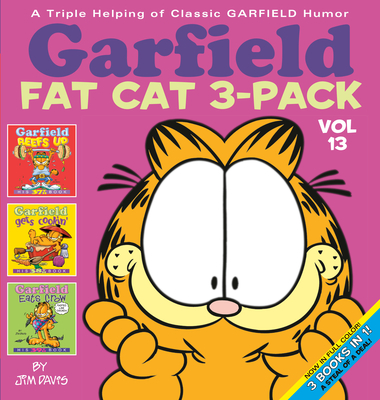 This is book number 6 in the Garfield series.

This uproarious collection includes three books in one: Garfield Beefs Up, Garfield Gets Cookin’, and Garfield Eats Crow.

He used to be perfect, but now he’s even better! Garfield, the fat cat with the super-sized ego, is back in the spotlight, dissing his dimwitted owner Jon—even pilfering his pants. Some cats chase mice; Garfield prefers to take legal action. When down on the farm, the city kitty puts up with—and puts down—Jon and his barnyard brother. No wonder Garfield’s often in a bad mood.

But no matter what, he’s always in the mood for food!

The GARFIELD FAT CAT 3-PACK series collects the GARFIELD comic-strip compilation books in a new, full-color format. Garfield may have gone through a few changes, but one thing has stayed the same: his enormous appetite for food and fun. So enjoy some super sized laughs with the insatiable cat, because too much fun is never enough!