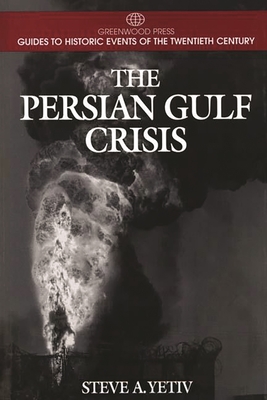 By Steve Yetiv
Not currently in store. Available to ship from distributor's warehouse.

Ideal for student research, this book provides a reference guide to the war as well as seven essays analyzing a variety of aspects of the war and its consequences. The essays address questions such as: How did Saddam Hussein become such a major threat and how has he survived the war? How critical was George Bush in driving U.S. and global foreign policy during the crisis? How were key decisions made? Did the war fail or succeed in retrospect? What were its long-run political, economic, strategic and cultural effects? Can collective security work? Is the United Nations likely to be effective in future crises? What lessons can be learned from the crisis? Yetiv draws on primary documents and extensive interviews with many key players such as Colin Powell, James Baker, and Brent Scowcroft, and Arab and European leaders which cast new light on the event.

Following a list of key players and a complete chronology of events, seven essays offer a contemporary perspective on the war: Drama in the Desert; War Erupts in a Storm: The Continuation of Diplomacy by Air and on the Ground; From Truman to Desert Storm: The Rising Eagle in the Persian Gulf; President Bush and Saddam Hussein: A Classic Case of Individuals Driving History; The West Arms a Brutal Dictator: Can Proliferation Be Controlled in the Post-Cold War World?; The United Nations and Collective Security: Was the Gulf War a Model for the Future?; The Impact of the Persian Gulf War. Reference components include a narrative historical overview of the war and biographical profiles of each of the major players in the war. Twelve primary documents include speeches and UN resolutions. A glossary of terms particular to the war and an annotated bibliography complete the work. A selection of photos complements the text. This readable guide is a one-stop source for reference material and in-depth analysis of the key foreign policy event of the 1990s, and should appeal to a broad readership.

STEVE A. YETIV is Assistant Professor of Political Science at Old Dominion University in Norfolk, Virginia, and a research affiliate at Harvard University's Center for Middle Eastern Studies. He is the author of America and the Persian Gulf: The Third Party Dimension in World Politics (Praeger, 1995) and many scholarly articles on the Middle East and international relations. Yetiv has been featured on CNN, C-SPAN, National Public Radio, Voice of America, and numerous other media outlets. In October 1996, he was the recipient of the Secretary's Open Forum Distinguished Public Service Award from the State Department in recognition of his contributions to national and international affairs.