Not Since Carrie: Forty Years of Broadway Musical Flops (Paperback) 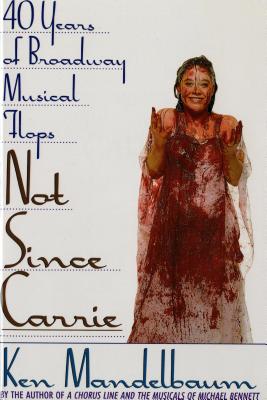 By Ken Mandelbaum
$23.99
Not Currently in Store. Usually Ships in 1-5 Days

Not Since Carrie is Ken Mandelbaum's brilliant survey of Broadway's biggest flops. This highly readable and entertaining book highlights almost 200 musicals created between 1950 and 1990, framed around the notorious musical adaptation of Carrie, and examines the reasons for their failure. "Essential and hilarious," raves The New Yorker, and The New York Times calls the book "A must-read."

Ken Mandelbaum is a theater critic. He is the author of A Chorus Line and the Musicals of Michael Bennett and Not Since Carrie: Forty Years of Broadway Musical Flops.

“Highly readable...strong opinions backed up by solid judgment. Mr. Mandelbaum has seen nearly everything and is not easily taken in....Justified affection for worthy scenes, wisely tempered by shrewd analysis...Mr. Mandelbaum has a very good ear that leads him to champion scores that have had smaller cult followings...As befits the subject, Not Since Carrie is full of entertaining backstage reportage...The illustrations are also fun and wittily chosen, whether embarrassing production photos or sadly hopeful posters and advertising.” —Frank Rich, The New York Times/WQXR

“Of all the theater books I've come across lately, none has entertained me more than Ken Mandelbaum's Not Since Carrie, a lively, illustrated account of forty years of Broadway musical flops.” —Doug Watt, New York Daily News

“An enormously amusing read...I cannot recall enjoying a theatre book as much as Not Since Carrie in a long time.” —Hap Erstein, The Washington Times

“The book we have all been waiting for. Not only does [Mandelbaum] identify more than two hundred flops by name, he analyzes each and every one of them at some length and misses very little in the way of backstage intrigue. Mandelbaum's chapter "Don't Let This Happen to You" could double as a primer for people who write musicals or aspire to write them. Fascinating book, this-- most definitely not a flop. It practically reads itself. And just chockful of stuff that's hard to find elsewhere.” —Nels Nelson, Philadelphia Daily News

“Essential and hilarious.” —The New Yorker