On Paper: The Everything of Its Two-Thousand-Year History (Hardcover) 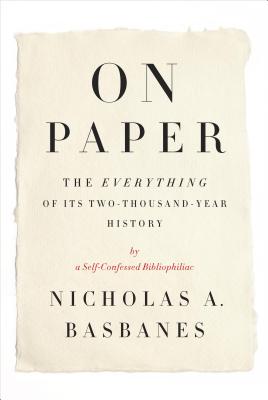 By Nicholas A. Basbanes
Email or call for price
Hard to Find

A Best Book of the Year: "Mother Jones," "Bloomberg News, ""National Post," "Kirkus Reviews"
A consideration of all things paper its invention that revolutionized human civilization; its thousand-fold uses (and misuses), proliferation, and sweeping influence on society; its makers, shapers, collectors, and pulpers written by the admired cultural historian and author of the trilogy on all things book-related: "A Gentle Madness;" "Patience and Fortitude" ( How could any intelligent, literate person not just love this book? Simon Winchester); and "A Splendor of Letters "( Elegant, wry, and humane Andre Bernard, "New York Observer").
Nicholas Basbanes writes about paper, from its invention in China two thousand years ago to its ideal means, recording the thoughts of Islamic scholars and mathematicians that made the Middle East a center of intellectual energy; from Europe, by way of Spain in the twelfth century and Italy in the thirteenth at the time of the Renaissance, to North America and the rest of the inhabited world.
Basbanes writes about the ways in which paper has been used to record history, make laws, conduct business, and establish identities . . . He makes clear that without paper, modern hygienic practice would be unimaginable; that as currency, people will do almost anything to possess it . . . that the Industrial Revolution would never have happened without paper on which to draw designs and blueprints.
We see paper's crucial role in the unfolding of historical events, political scandals, and sensational trials: how the American Revolution which took shape with the Battle of Lexington and Concord, began with the Stamp Act of 1765 . . . the Dreyfus Affair and the forged memorandum known as the bordereau . . . America's entry into World War I with the Zimmerman Telegram . . . the Alger Hiss spy case and Whittaker Chambers's testimony involving the notorious Pumpkin Papers . . . Daniel Ellsberg's release of the Pentagon Papers in 1971 and the scandal of Watergate.
Basbanes writes of his travels to get to the source of the story to China, along the Burma Road, and to Japan, whose handmade paper, washi, is as much an expression of the human spirit as it is of craftsmanship . . . to Landover, Maryland, home of the National Security Agency and its one hundred million ultra secret documents, pulped by cryptologists and sent to be recycled as pizza boxes and egg cartons . . . to the Crane Paper mill of Dalton, Massachusetts, a seventh-generation family-owned enterprise, the exclusive supplier of paper for American currency since 1879 . . . and to the Kimberly-Clark mill in New Milford, Connecticut, manufacturer daily of one million boxes of Kleenex tissue and as many rolls of Scott kitchen towels.
Entertaining, illuminating, irresistible, a book that masterfully guides us through paper's inseparability from human culture . . .

Nicholas A. Basbanes is an award-winning investigative journalist and was literary editor of the "Worcester Sunday Telegram." His articles have appeared in "The New York Times," the "Los Angeles Times," "The Washington Post," and "Smithsonian," and he is a recipient of a National Endowment for the Humanities Fellowship. Basbanes lives in North Grafton, Massachusetts, with his wife.

“Nicholas Basbanes is an especially congenial writer, a quality he displayed memorably in A Gentle Madness. He does it again most pleasurably in On Paper, a wide-ranging investigation into the “everything” of that ubiquitous and indispensable construction of cellulose fibers whose history paralleled — and made possible — the rise of civilization…Mainly, though, On Paper is a travel book, conducted by the most amiable and civilized of guides.”
-David Walton, Dallas News

“Basbanes has poured his heart and soul into this splendid survey of a beautiful human invention.”
-Philip Marchand, Canadian National Post

“This is not a simple history of paper’s discovery and the spread of the material…Written as a first-hand exploration, On Paper takes a close look at a product so ubiquitous as to be almost invisible and makes the reader see how really amazing it is.  Basbanes reveals how paper changed the world—over and over again.”
-Pamela Toler, Shelf Awareness (Starred Review)

“With On Paper, Basbanes, the consummate bibliophile’s bibliophile, offers an erudite, mesmerizing story about how something we consider so everyday has shaped our lives.  In our age of supposedly dying print, Basbanes’s book is at once a compelling scholarly achievement and a provocative invitation to reconsider and celebrate what is truly one of the wonders of the world, that fragile yet enduring skin upon which humanity’s knowledge and vision are tattooed: paper.”
—Bradford Morrow

“A delightful and intrepid guide in this capacious history of paper…A lively tale told with wit and vigor.”
-Kirkus (Starred Review)

“An absolutely fascinating tale.  Told in an engaging, accessible manner, Basbane’s coverage of the topic is wide-ranging, freewheeling, authoritative…An essential, engrossing book that no book lover should be without."
-Publisher’s Weekly (Starred Review)

"A wonderful, fascinating and timely book on a subject some have prematurely declared obsolete. Basbanes reminds us of the vital role the invention of paper has played through the centuries in the dissemination of knowledge and ideas. His stories that run the gamut, from the way paper  is made to a poignant sheet of paper floating down to the sidewalk on September 11, 2001. Not to be missed."
-Meryle Secrest