The Six-Day War: The Breaking of the Middle East (Hardcover) 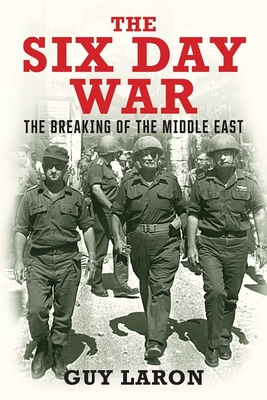 By Guy Laron
Email orders@tridentbookscafe.com or call for price
Out of Print

An enthralling, big-picture history that examines the Six-Day War, its causes, and its enduring consequences against its global context

One fateful week in June 1967 redrew the map of the Middle East. Many scholars have documented how the Six-Day War unfolded, but little has been done to explain why the conflict happened at all. As we approach its fiftieth anniversary, Guy Laron refutes the widely accepted belief that the war was merely the result of regional friction, revealing the crucial roles played by American and Soviet policies in the face of an encroaching global economic crisis, and restoring Syria’s often overlooked centrality to events leading up to the hostilities.

The Six-Day War effectively sowed the seeds for the downfall of Arab nationalism, the growth of Islamic extremism, and the animosity between Jews and Palestinians. In this important new work, Laron’s fresh interdisciplinary perspective and extensive archival research offer a significant reassessment of a conflict—and the trigger-happy generals behind it—that continues to shape the modern world.

Guy Laron is senior lecturer in international relations, Hebrew University of Jerusalem, and has been a visiting scholar at the University of Maryland, Northwestern University, and Oxford. He is the author of Origins of the Suez Crisis and lives in Tel Aviv, Israel.

"In this fine work, Guy Laron, a young historian at the Hebrew  University of Jerusalem, takes a fresh look at the war and its causes. . . . Like all the best history, Laron’s book is studded with fascinating facts and anecdotes that shed light on his theories."—Michael Sheridan, Sunday Times

"With the occupation now in ripe middle age, an engaging crop of new books is re­examining its consequences —and, in the case of Guy Laron’s The Six Day War, making us look afresh at the events that led to conflict between Israel and its neighbours. Laron, a historian at Jerusalem’s Hebrew University, argues that the war was no accident; rather, it was 'designed and even desired by prominent military figures in the warring countries.'"—John Reed, Financial Times

"For Laron, there are no simple binaries. . . . Laron’s critical approach echoes that of Segev, while his diligent and eye-opening archival work complements that undertaken by Oren. He describes the war from a number of different perspectives, and places it in a global context . . . he paints a comprehensive and captivating picture of a complex reality."—Ari Shavit, Times Literary Supplement

"A new history of the lead-up to the war by Guy Laron . . . presents the economic and geopolitical conditions that made the conflict almost inevitable for all the combatants."—Gal Beckerman, New York Times Book Review

"A penetrating study of a conflict that, although brief, helped establish a Middle Eastern template that is operational today. . . . Readers with an interest in Middle Eastern geopolitics will find much of value."—Kirkus Reviews

"Guy Laron’s forthcoming book on the 1967 Six-Day War—fittingly slated for publication in the year of the war’s 50th anniversary—is both impressive and disheartening. And it should be required reading for President-elect Donald Trump. . . . Readers will learn that it’s sometimes much easier for leaders to go to war than to make peace. So perhaps, despite everything else on his calendar right now, this is a book the president-elect should read. At the very least, we ordinary citizens should read it."—Jack Reimer, Jewish News Service

"Guy Laron’s challenging new book, The Six-Day War: The Breaking of the Middle East, is well worth reading."—Moment

“Laron has produced an excellent study. He is not afraid to challenge conventional wisdom, and has offered readers an interesting and important account of the [1967 Arab-Israeli] war on the occasion of its 50th anniversary.”—W. Andrew Terrill, Middle East Journal

"Guy Laron's Six Day War: The Breaking of the Middle East is a detailed and impressive account that does much to illuminate the origins of this elusive conflict."—Ray Takeyh, Survival Global Politics and Strategy

"Revealing the long-held Israeli plans for expanding its borders, Laron goes significantly beyond William Roger Louis and Avi Shlaim’s important edited collection The 1967 Arab-Israeli War . . .  Laron shows the extent to which Israel’s General Staff were “eager to use the next war to expand Israel’s borders” and conquer new territories such as the West Bank and Gaza."—Thomas Erlich Reifer, Journal of Palestine Studies


"It is actually amazing that one scholar could produce so much detailed analysis of so many actors in this conflict: Egypt, Syria, Israel, the United States, and the Soviet Union. Dealing in depth with the domestic politics of each, including personality clashes and rivalries, all within the context of both regional and global events, Laron’s book is a remarkable accomplishment. Written clearly and logically and, most important of all, thoroughly documented, the book will be a classic regarding the background to and understanding of the Six-Day War."—Galia Golan, Israel Studies Review

“It is actually amazing that one scholar could produce so much detailed analysis of so many actors in this conflict: Egypt, Syria, Israel, the United States, and the Soviet Union. . . . Laron’s book is a remarkable accomplishment. Written clearly and logically and, most important of all, thoroughly documented, the book will be a classic regarding the background to and understanding of the Six-Day War.”—Galia Golan, Israel Studies Review

“A finely balanced account that puts the politics back into the study of the origins of the June 1967 War. Outstanding scholarship—this new book confirms Laron as a leading authority on the Arab-Israeli conflict.”—Eugene Rogan, author of The Arabs: A History

"This timely and riveting work, drawing upon new archival materials from all the warring sides as well as US, Soviet, and Warsaw-Pact sources, provides a meticulously detailed political and military narrative along with a perceptive analysis of the origins, course, and outcome of the conflict that changed the Middle East and world politics."—Carole Fink, author of Defending the Rights of Others and Cold War: An International History

"Laron uses sources no one else has and challenges all those who would understand these events as confined to its Middle Eastern context. Fifty years after the outbreak of the June 1967 war and there is finally someone with something new to say about it."—Robert Vitalis, author of White World Order, Black Power Politics

"A new and exciting interpretation of the war that broke the Middle East, with the Soviet and Cold War aspects covered in full for the first time.  A very valuable corrective to the existing literature."—Odd Arne Westad, Harvard University, author of The Cold War: A World History