House of Lost Worlds: Dinosaurs, Dynasties, and the Story of Life on Earth (Hardcover) 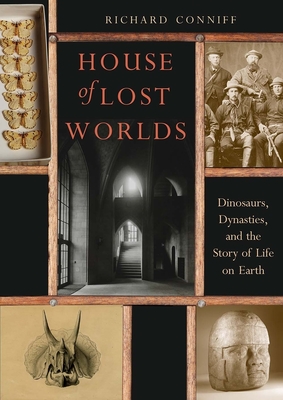 By Richard Conniff
Email orders@tridentbookscafe.com or call for price
Out of Print

A gripping tale of 150 years of scientific adventure, research, and discovery at the Yale Peabody Museum

This fascinating book tells the story of how one museum changed ideas about dinosaurs, dynasties, and even the story of life on earth. The Yale Peabody Museum of Natural History, now celebrating its 150th anniversary, has remade the way we see the world. Delving into the museum’s storied and colorful past, award-winning author Richard Conniff introduces a cast of bold explorers, roughneck bone hunters, and visionary scientists. Some became famous for wresting Brontosaurus, Triceratops, and other dinosaurs from the earth, others pioneered the introduction of science education in North America, and still others rediscovered the long-buried glory of Machu Picchu.

In this lively tale of events, achievements, and scandals from throughout the museum’s history. Readers will encounter renowned paleontologist O. C. Marsh who engaged in ferocious combat with his “Bone Wars” rival Edward Drinker Cope, as well as dozens of other intriguing characters. Nearly 100 color images portray important figures in the Peabody’s history and special objects from the museum’s 13-million-item collections. For anyone with an interest in exploring, understanding, and protecting the natural world, this book will deliver abundant delights.

Richard Conniff is a prize-winning science writer and journalist and the author of nine books including The Species Seekers: Heroes, Fools, and the Mad Pursuit of Life on Earth. He lives in Old Lyme, CT.

"Conniff [is] a writer with a gift for teasing out the bizarre human dramas endemic to natural history. . . . While House of Lost Worlds chronicles the Peabody’s achievements and luminaries quite thoroughly, it also takes a hard-nosed look at its debacles."—Jennie Erin Smith, Wall Street Journal

“A rich and enthusiastic history. . . . This book sparkles with delightful stories and anecdotes.”—Kirkus Reviews, starred review

"In House of Lost Worlds, Richard Conniff tells the story of the Peabody through the curious characters connected to it. . . . Throughout the book, [He] emphasizes the discoveries yet to be made and the pleasure of finding out something new."—Science News

"In House of Lost Worlds, Richard Conniff fills an instructive gap in the story of how and why American museums were invented. The creation of Yale’s Peabody Museum of Natural History is a tale encompassing all three subjects of the subtitle, with the most delicious being the drag-down drama of how dynastic maneuvering helped spark the museum to life."—Amy Henderson, Weekly Standard

“Overall this book is about one of the great stories of science’s coming of age. But by far one of the best reasons to read it is that the author just cannot seems to help but do what science writing should always do: he tells a great story so well that you really do not realize how much you are learning in every paragraph.”—Lorin R. King, Quarterly Review of Biology

“A fascinating and magisterial review of the history of the Peabody Museum, and the major figures who made it. It plunges deeply into science, objects, and the lives of the people who collected those objects and made them ‘speak,’ and it does so in an accessible and, indeed, page-turning way.”—Alison Richard, Yale University

“An important and riveting story of how real-life scientists built a great museum and what it means for biology and natural history. Exciting from beginning to end, House of Lost Worlds is for anyone who loves adventurous reading.”—Bernd Heinrich, author of One Wild Bird at a Time: Portraits of Individual Lives

“Museums are not just full of fossils and minerals. They’re also packed with wonderfully human stories. House of Lost Worlds tells the stories of one of the world’s great natural history museums, and in the process, it becomes a fascinating chronicle of the rise of American science.”—Carl Zimmer, author of Parasite Rex

“Yale's Peabody Museum is a national treasure. Richard Conniff brings the rich history of the Museum alive with stories of the great characters whose discoveries and ideas transformed science over the past century and a half.” —Neil H. Shubin, The University of Chicago, author of Your Inner Fish

“Remarkable . . . superbly written and makes the history and individuals come alive. . . . this book should have a much larger appeal than just Peabody-philes because it is so much about the role of museums in the development of American science.”—Thomas E. Lovejoy, George Mason University