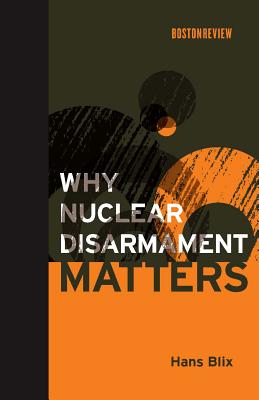 From the former UN head weapons inspector in Iraq, a plea for a renewed global disarmament movement.

In 2002 Dr. Hans Blix, then chief United Nations weapons inspector, led his team on a search for weapons of mass destruction in Iraq. Before the United States went to war with Iraq the next March, he maintained there were no WMD in Iraq. History proved him right. For more than forty years Dr. Blix has worked on global disarmament, and with this new book he renews the call for nuclear nonproliferation. His interests, though, go beyond stemming the threat of nuclear attack from rogue states and terrorists. It is not, he argues, a recipe for success for nuclear states to tell the rest of the world that it must stay away from the very weapons that nuclear states claim are indispensable. We will never be able to convince rogue states to halt the pursuit of nuclear weapons programs unless we take the lead in a new nonproliferation and disarmament movement. Looking back at the UN post-World War II efforts against the use of nuclear weapons, Blix documents the retreat from early commitments by nuclear powers, most alarmingly from pledges against first use and toward programs to develop new types of nuclear weapons. He urges us to revive these efforts, and that the world's powers also look at issues of global disarmament and security as pieces of the same puzzle. Why Nuclear Disarmament Matters includes specific suggestions--how the UN can set the stage for a credible multilateral disarmament and nonproliferation process; what kind of treaties would be most helpful--and recommendations for regional policy, including providing the Middle East with enriched uranium for civilian nuclear power production but not allowing uranium enrichment there. From March 2000 to June 2003 Hans Blix was Executive Chairman of the UN Monitoring, Verification, and Inspection Commission (UNMOVIC). Dr. Blix, author of Disarming Iraq, is Chair of the Swedish government's Commission on Weapons of Mass Destruction.

From March 2000 to June 2003 Hans Blix was Executive Chairman of the UN Monitoring, Verification, and Inspection Commission (UNMOVIC). Dr. Blix, author of Disarming Iraq, is Chair of the Swedish government's Commission on Weapons of Mass Destruction.