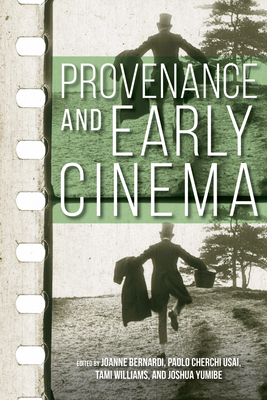 Remnants of early films often have a story to tell.

As material artifacts, these film fragments are central to cinema history, perhaps more than ever in our digital age of easy copying and sharing. If a digital copy is previewed before preservation or is shared with a researcher outside the purview of a film archive, knowledge about how the artifact was collected, circulated, and repurposed threatens to become obscured. When the question of origin is overlooked, the story can be lost. Concerned contributors in Provenance and Early Cinema challenge scholars digging through film archives to ask, How did these moving images get here for me to see them?

This volume, which features the conference proceedings from Domitor, the International Society for the Study of Early Cinema, 2018, questions preservation, attribution, and patterns of reuse in order to explore singular artifacts with long and circuitous lives.

Joanne Bernardi is Professor of Japanese and Film and Media Studies at the University of Rochester. She is author of Writing in Light: The Silent Scenario and the Japanese Pure Film Movement. Paolo Cherchi Usai is Senior Curator of the Moving Image Department at the George Eastman Museum and Adjunct Professor of Film at the University of Rochester. He is cofounder of Domitor. He is also author of Silent Cinema: A Guide to Study, Research and Curatorship and editor (with David Francis, Alexander Horwath, and Michael Loebenstein) of Film Curatorship: Archives, Museums, and the Digital Marketplace. Tami Williams is Associate Professor of Film Studies and English at the University of Wisconsin-Milwaukee and President of Domitor. She is author of Germaine Dulac: A Cinema of Sensations and editor (with Elena Gorfinkel) of Global Cinema Networks and (with Kaveh Askari, Scott Curtis, Frank Gray, Louis Pelletier, and Joshua Yumibe) of Performing New Media, 1890-1915. Joshua Yumibe is Professor and Director of Film Studies at Michigan State University. He is author (with Sarah Street) of Chromatic Modernity: Color, Cinema, and Media of the 1920s; (with Tom Gunning, Jonathan Rosen, and Giovanna Fossati) of Fantasia of Color in Early Cinema; and Moving Color: Early Film, Mass Culture, Modernism. He is also editor (with Scott Curtis, Philippe Gauthier, and Tom Gunning) of The Image in Early Cinema: Form and Material.