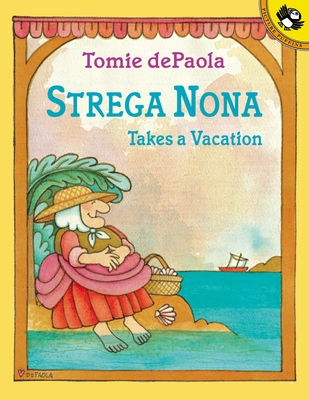 Lately Strega Nona has been distracted-she even gave Signore Mayor the wrong remedy for his headache. One night Nona has a dream about her Grandma Concetta, who has been in heaven for many years, and her little house at the seashore. Nona decides that she will take a vacation there. While Strega Nona is away, Bambolona will do the daily remedies and Big Anthony will do the chores. With these two left in charge, what could possibly go wrong?

Tomie dePaola was born in Meriden, Connecticut, in 1934, to a family of Irish and Italian background. His determination to create books for children led to a BFA from Pratt Institute in Brooklyn, New York, and an MFA from the California College of Arts & Crafts in Oakland, California.

His particular way with color, line, detail, and design have earned him many of the most prestigious awards in his field, among them a Caldecott Honor Award for Strega Nona, the Smithsonian Medal, the Kerlan Award from the University of Minnesota for his "singular attainment in children's literature," the Catholic Library Association's Regina Medal for his "continued distinguished contribution," and the University of Southern Mississippi Medallion. He was also the 1990 United States nominee for the Hans Christian Andersen Medal for illustration, and received the Laura Ingalls Wilder Award for lifetime contribution to children's literature in 2011.

DePaola has published almost 200 children's books in 15 different countries over the past 30 years. Among his most well-known titles are the Strega Nona series, 26 Fairmount Avenue, and The Legend of the Indian Paintbrush.

DePaola lives in an interesting house in New Hampshire with his four dogs. His studio is in a large renovated 200-year-old barn.

"Readers of all ages can be grateful that dePaola continues to practice his magic so well."-The New York Times Book Review

"A fine choice for both story hours and lap sharing." -Booklist