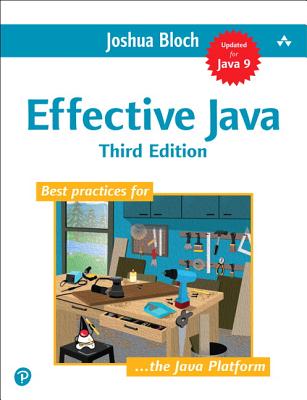 Since this Jolt-award winning classic was last updated in 2008, the Java programming environment has changed dramatically. Java 7 and Java 8 introduced new features and functions including, forEach() method in Iterable interface, default and static methods in Interfaces, Functional Interfaces and Lambda Expressions, Java Stream API for Bulk Data Operations on Collections, Java Time API, Collection API improvements, Concurrency API improvements, and Java IO improvements. In this new edition of Effective Java, Bloch explores new design patterns and language idioms that have been introduced since the second edition was released in 2008 shortly after Java SE6, including Lambda, streams, generics and collections, as well as selected Java 9 features. As in previous editions, each chapter consists of several "items" presented in the form of a short, standalone essay that provides specific advice, insight into Java platform subtleties, and updated code examples. The comprehensive descriptions and explanations for each item illuminate what to do, what not to do, and why.

Joshua Bloch is a professor at Carnegie Mellon University. He was formerly the chief Java architect at Google, a distinguished engineer at Sun Microsystems, and a senior systems designer at Transarc. He led the design and implementation of numerous Java platform features, including the JDK 5.0 language enhancements and the Java Collections Framework. He holds a Ph.D. in computer science from Carnegie Mellon University and a B.S. in computer science from Columbia University. Normal 0 false false false EN-US X-NONE X-NONE