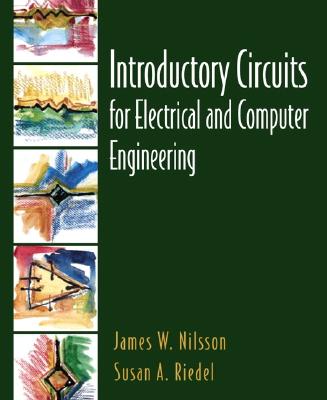 Readers benefit because the book is based on these three themes: (1) it builds an understanding of concepts based on information the reader has previously learned; (2) it helps stress the relationship between conceptual understanding and problem-solving approaches; (3) the authors provide numerous examples and problems that use realistic values and situations to give users a strong foundation of engineering practice. The book also includes a PSpice Supplement which contains problems to teach readers how to construct PSpice source files; and this PSpice Version 9.2 can be used to solve many of the exercises and problems found in the book. Topical emphasis is on the basic techniques of circuit analysis--Illustrated via a Digital-to-Analog Resistive Ladder (Chapter 2); the Flash Converter (Chapter 4); Dual Slope Analog-to-Digital Converter (Chapter 5); Effect of parasite inductance on the step response of a series RLC circuit (Chapter 6); a Two-Stage RC Ladder Network (Chapter 8); and a Switching Surge Voltage (Chapter 9). For Electrical and Computer Engineers.

Professor James W. Nilsson taught at Iowa State University for 39 years. Since retiring from Iowa State, he has been a visiting professor at Notre Dame, California Polytechnic at San Luis Obispo, and the United States Air Force Academy. In 1962, he co-authored (with R.G. Brown) Introduction to Linear Systems Analysis (John Wiley & Sons). In 1968, he authored Introduction to Circuits, Instruments, and Electronics (Harcourt Brace and World). Professor Nilsson received a Standard Oil Outstanding Teacher Award in 1968, the IEEE Undergraduate Teaching Award in 1992, and the McGraw-Hill Jacob Millman Award in 1995. In 1990, he was elected to the rank of Fellow of the Institute of Electrical and Electronics Engineers. Professor Susan A. Riedel has been a member of the Department of Electrical and Computer Engineering at Marquette University since 1981. She also holds a clinical research appointment in the Department of Orthopaedics at the Medical College of Wisconsin and was a visiting professor in the Bioengineering Unit at the University of Strathclyde, Glasgow, Scotland, as a Fulbright Scholar during the 1989-1999 academic year. She has received two awards for teaching excellence at Marquette, and was recognized for her research contributions with an award from the Chicago Unit of the Shriner's Hospitals.