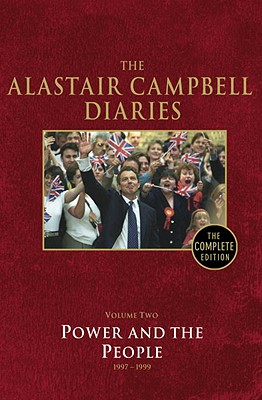 By Alastair Campbell
Email orders@tridentbookscafe.com or call for price
Out of Print

The second volume of Campbell's riveting diaries, rejoining New Labor as they come into power. Power and the People is the second of four volumes, and covers the first two years of New Labor government, beginning with their victory at the polls in 1997. Volume Two details the initial challenges faced by Labor as they come to power and settle into running the country. It covers many of the memorable events of the period: from the Omagh bombing to President Clinton's 'relations' with Monica Lewinsky.

Alastair Campbell graduated from Cambridge University with a degree in modern languages. He worked for Tony Blair, first as his press secrtary, then as official spokesman and director of communications and strategy from 1994 to 2003. He has been engaged in writing, public speaking, working for Leukaemia Research as chairman of fundraising, and continuing to advise Blair, Gordon Brown and other leading Labour figures. His first novel, All In The Mind, and an accompanying award-winning TV documentary, Cracking Up, led to him being voted Mind Champion of the Year. A second novel, Maya, was published earlier this year.

"Campbell is a compelling diarist... The Campbell Diaries provide the fullest insider account so far of new Labour's ascent to power."
--The Times, on Vol. 1

"Campbell's world is the brutal, angry, hard-driven, jokey, football-crazed and intensely male world of tabloid journalism. He is a fluent and industrious reporter, with amazing stamina."
--Telegraph, on Vol. 1

"There are plenty of nuggets here that are fascinating, some passages that make you wince and others that are gripping. It has historical value."
--Observer, on Vol. 1