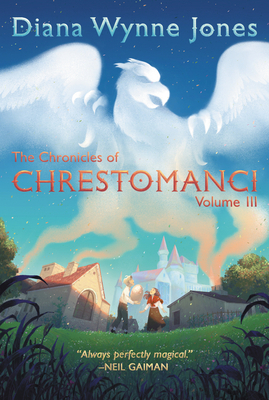 This is book number 3 in the Chronicles of Chrestomanci series.

In Conrad’s Fate, Conrad Tesdinic must overcome his terrible karma while working at the mysterious Stallery Mansion. Luckily for him, young Christopher Chant is also undercover at Stallery to rescue his friend Millie.

In The Pinhoe Egg, Cat Chant and Marianne Pinhoe discover a mystical egg in Marianne’s attic. If Marianne and Cat can harness their own considerable powers, they’ll soon see how the egg fits into the many secrets in Marianne’s family of secret rogue witches. But it may lead to a mess only the Chrestomanci can sort out.

The third of three volumes, the Chronicles of Chrestomanci can be read in any order.