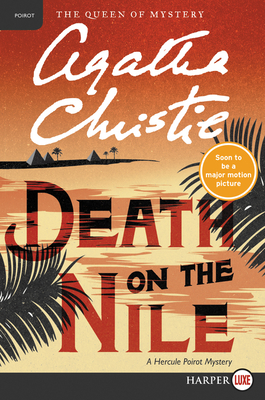 This is book number 17 in the Hercule Poirot Mysteries series.

Soon to be a major motion picture sequel to Murder on the Orient Express with a screenplay by Michael Green, directed by and starring Kenneth Branagh alongside Gal Gadot—coming February 11, 2022!

Beloved detective Hercule Poirot embarks on a journey to Egypt in one of Agatha Christie’s most famous mysteries.

The tranquility of a luxury cruise along the Nile was shattered by the discovery that Linnet Ridgeway had been shot through the head. She was young, stylish, and beautiful. A girl who had everything . . . until she lost her life.

Hercule Poirot recalled an earlier outburst by a fellow passenger: “I’d like to put my dear little pistol against her head and just press the trigger.” Yet under the searing heat of the Egyptian sun, nothing is ever quite what it seems.

A sweeping mystery of love, jealousy, and betrayal, Death on the Nile is one of Christie’s most legendary and timeless works.

“Death on the Nile is perfect.” —The Guardian

“One of her best. . . . First rate entertainment.” —Kirkus Reviews

“Death on the Nile is perfect.” — The Guardian (UK)

“One of her best. . . . First rate entertainment.” — Kirkus Reviews

“The main alibi is of the first brilliance . . . the descriptive work hits, as it were, the Nile on the head.” — The Observer (UK)

“Must be read twice, once for enjoyment and once to see how the wheels go round.” — The Times (UK)

“Agatha Christie’s indelibly etched characters have entertained millions across the years and a love of her work has brought together generations of readers—a singular achievement for any author and an inspiration to writers across the literary landscape.” — Jacqueline Winspear, New York Times bestselling author of the Maisie Dobbs novels

“Any mystery writer who wants to learn how to plot should spend a few days reading Agatha Christie. She’ll show you everything you want to know.” — Donna Leon, New York Times bestselling author of the Commissario Brunetti novels

“A peach of a case for Poirot. I take my hat off to the author for as ingenious an alibi as can well be imagined.” — Sunday Times (UK)