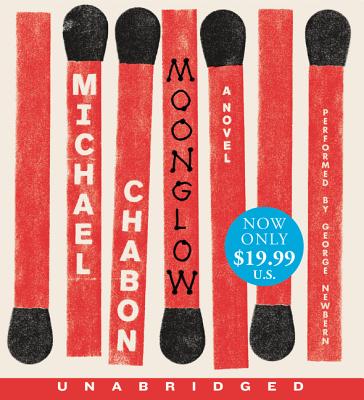 By Michael Chabon, George Newbern (Read by)
$23.99
Email or call for price.

“The intersection of world history and family history, the interplay of memory and imagination, a tangle of humor and grief, and the blurred and shifting line that separates sanity and madness all come into play in this stunning book. In the months before his death, Chabon's grandfather revealed much of his life to his grandson. On that foundation, Chabon has built a novel filled with family stories, World War II episodes -- including an appearance by Wernher von Braun -- an obsession with rocketry, and a vividly realized, against-all-odds love story. While all the characters are richly developed, the narrator's grandfather -- the brave, eccentric, anger-fueled, and deeply loving center of this novel -- will remain with readers forever.”
— Banna Rubinow (E), The River's End Bookstore, Oswego, NY

“A feeling of wonder pervades this captivating novelization of the mysterious lives of Chabon's grandfather and grandmother. This thrilling, poignant, and magical book left me feeling like I do when I leave the theater after a great movie-I couldn't talk; I just had to readjust to the world.”
— Tim Benz, Joseph-Beth Booksellers, Crestview Hills, KY

Following on the heels of his New York Times–bestselling novel Telegraph Avenue, Pulitzer Prize–winning author Michael Chabon delivers another literary masterpiece: a novel of truth and lies, family legends, and existential adventure—and the forces that work to destroy us.

In 1989, fresh from the publication of his first novel, The Mysteries of Pittsburgh, Michael Chabon traveled to his mother’s home in Oakland, California, to visit his terminally ill grandfather. Tongue loosened by powerful painkillers, memory stirred by the imminence of death, Chabon’s grandfather shared recollections and told stories the younger man had never heard before, uncovering bits and pieces of a history long buried and forgotten. That dreamlike week of revelations forms the basis of the novel Moonglow, the latest feat of legerdemain in the ongoing magic act that is the art of Michael Chabon.

Moonglow unfolds as the deathbed confession, made to his grandson, of a man the narrator refers to only as “my grandfather.” It is a tale of madness, of war and adventure, of sex and desire and ordinary love, of existential doubt and model rocketry, of the shining aspirations and demonic underpinnings of American technological accomplishment at mid-century and, above all, of the destructive impact—and the creative power—of the keeping of secrets and the telling of lies. A gripping, poignant, tragicomic, scrupulously researched and wholly imaginary transcript of a life that spanned the dark heart of the twentieth century, Moonglow is also a tour de force of speculative history in which Chabon attempts to reconstruct the mysterious origins and fate of Chabon Scientific, Co., an authentic mail-order novelty company whose ads for scale models of human skeletons, combustion engines and space rockets were once a fixture in the back pages of Esquire, Popular Mechanics and Boy’s Life. Along the way Chabon devises and reveals, in bits and pieces whose hallucinatory intensity is matched only by their comic vigor and the radiant moonglow of his prose, a secret history of his own imagination.

From the Jewish slums of prewar South Philadelphia to the invasion of Germany, from a Florida retirement village to the penal utopia of New York’s Wallkill Prison, from the heyday of the space program to the twilight of “the American Century,” Moonglow collapses an era into a single life and a lifetime into a single week. A lie that tells the truth, a work of fictional non-fiction, an autobiography wrapped in a novel disguised as a memoir, Moonglow is Chabon at his most daring, his most moving, his most Chabonesque.

Michael Chabon is the bestselling and Pulitzer Prize-winning author of Moonglow and The Amazing Adventures of Kavalier & Clay, among many others. He lives in Berkeley, California with his wife, the novelist Ayelet Waldman, and their children.