Leah on the Offbeat (Hardcover) 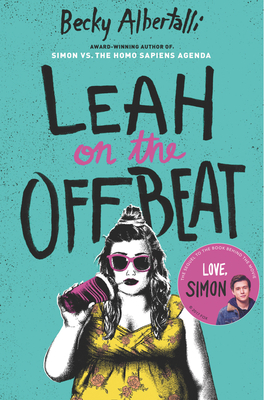 By Becky Albertalli
$17.99
Not Currently in Store. Usually Ships in 1-5 Days

A semi-sequel to Simon and the Homo Sapiens Agenda, Leah on the Offbeat was a hilarious and emotionally resonant look at coming to terms with one's sexuality, future, and anxieties wrapped in an adorable, amusing package with near fanfiction levels of fluff and cuteness. Bisexual representation isn't high on the list of LGBT representation in many books, including YA, and so having bi characters as both protagonist and love interest in this book was wonderful for representation. Leah deserves the same amount of love that Simon got--and hopefully a movie, too!

In this sequel to the acclaimed Simon vs. the Homo Sapiens Agenda—now a major motion picture, Love, Simon—we follow Simon’s BFF Leah as she grapples with changing friendships, first love, and senior year angst.

When it comes to drumming, Leah Burke is usually on beat—but real life isn’t always so rhythmic.

She’s an anomaly in her friend group: the only child of a young, single mom, and her life is decidedly less privileged. She loves to draw but is too self-conscious to show it. And even though her mom knows she’s bisexual, she hasn’t mustered the courage to tell her friends—not even her openly gay BFF, Simon.

So Leah really doesn’t know what to do when her rock-solid friend group starts to fracture in unexpected ways. With prom and college on the horizon, tensions are running high.

It’s hard for Leah to strike the right note while the people she loves are fighting—especially when she realizes she might love one of them more than she ever intended.

Plus don't miss Yes No Maybe So, Becky Albertalli's and Aisha Saeed's heartwarming and hilarious new novel, coming in 2020!

Becky Albertalli is the #1 New York Times bestselling author of William C. Morris Award winner and National Book Award longlist title Simon vs. the Homo Sapiens Agenda (now a major motion picture, Love, Simon); the acclaimed The Upside of Unrequited; and What If It’s Us (cowritten with Adam Silvera). Becky lives with her family in Atlanta. You can visit her online at www.beckyalbertalli.com.

“Albertalli has a fantastic ear for voice, and it’s beautifully on display in Leah’s funny, wry, and vulnerable first-person narrative. Everything Albertalli already did so well in Simon she’s improved upon here, and fans of the first book will be utterly smitten with Leah.”
— Booklist (starred review)