How to Be a Woman (Paperback) 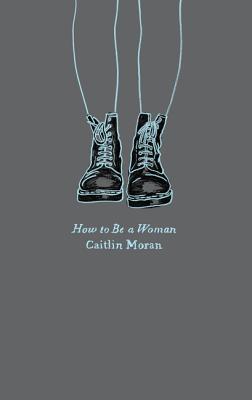 By Caitlin Moran
Email or call for price
Hard to Find

It is extremely rare for novels to make me audibly laugh, but this one surely did. Every chapter contains hilarious commentary on the ludicrous moments women have to deal with as they grow up. Although Moran grew up in a different country and time than I did, her experiences dealing with puberty, sexism, and her relationships to the women in her life truly resonated with me. I loved every second of each of Moran's deeply personal and insightful coming of age stories.

The New York Times bestseller—part manifesto, part memoir—that put a new face on feminism as it cut to the heart of issues with an irreverent, transcendent, and hilarious touch—now available in a limited Olive Edition.

“There are lots of things to love about Caitlin Moran’s How to Be a Woman….A glorious, timely stand against sexism so ingrained we barely even notice it. It is, in the dour language [Moran] militates so brilliantly against, a book that needed to be written.”—New York Times

Though they have the vote and the Pill and haven't been burned as witches since 1727, life isn't exactly a stroll down the catwalk for modern women. They are beset by uncertainties and questions: Why are they supposed to get Brazilians? Why do bras hurt? Why the incessant talk about babies? And do men secretly hate them?

Caitlin Moran interweaves provocative observations on women's lives with laugh-out-loud funny scenes from her own, from the riot of adolescence to her development as a writer, wife, and mother. With rapier wit, Moran slices right to the truth—whether it's about the workplace, strip clubs, love, fat, abortion, popular entertainment, or children—to jump-start a new conversation about feminism. With humor, insight, and verve, How to Be a Woman lays bare the reasons why female rights and empowerment are essential issues not only for women today but also for society itself.

Caitlin Moran’s debut book, How to Be a Woman, was an instant New York Times bestseller. Her first novel, How to Build a Girl, received widespread acclaim. She lives in London. You can follow Caitlin on Twitter: @caitlinmoran

“It is bracing in this season of losing [Nora] Ephron to discover a younger feminist writer who scrimmages with the patriarchy and drop kicks zingers with comic flair….A must-read for anyone curious to find out just how very funny a self-proclaimed ‘strident feminist’ can be.”
— Maureen Corrigan, NPR's Fresh Air

“A fresh, funny take on modern feminism that shines a light on issues facing every woman, lovingly boiled down to the basics with insight and humor.”
— Today Show

“Scathingly funny….Moran makes us think about femininity and feminism, and whether you agree or not, she’s fascinating.”
— People

“Caitlin Moran taught me more about being a woman than being a woman did. I’m pretty sure I had testicles before I read this book.”
— Jenny Lawson, author of Let's Pretend This Never Happened: A Mostly True Memoir

“A glorious, timely stand against sexism so ingrained we barely even notice it. It is, in the dour language [Moran] militates so brilliantly against, a book that needed to be written.”
— New York Times

“The UK’s answer to Tina Fey, Chelsea Handler, and Lena Dunham all rolled into one.”
— Marie Claire

“There is a good reason for [its success]: it is pretty phenomenal….[Moran] wrote the book in just 5 months….Chances are you’ll read it in far less time than that, turning down the corners of extra-resonating pages to come back to later.”
— Jenn Doll, The Atlantic Wire

“With her drunk-on-gin-with-my-lady-friends honesty and humor, Moran, a Times of London columnist, snips the man out of manifesto, spinning her message of radically sensible female empowerment.”
— Vanity Fair.com

“Bravely and brilliantly weaves personal anecdotes and cutting insight into a book that is at once instructional, confessional, and a call for change….Moran shifts effortlessly between her own hilarious experiences and larger questions about women’s place in the modern world.”
— Interview Magazine

“As funny and careerist as Tina Fey’s Bossypants, as divulging as Ayelet Waldman’s Bad Mother and as earthy as Cheryl Strayed’s Wild.”
— Holloway McCandless, Shelf Awareness

“Caitlin Moran is so fabulous, so funny, so freshly feminist. I don’t want to be like her—I want to be her. But if I can’t, at least I can relish her book. You will, too.”
— Peggy Orenstein, author of Cinderella Ate My Daughter

“Her arguments are hilarious and spot on….This isn’t a self-help guide, and Moran’s not really telling you how to be a woman. Instead, she’s giving you permission to laugh: at ourselves, at her, and at anyone who think there’s only one way to be a woman.”
— Shannon Carlin, Bust Magazine

“How funny is Caitlin Moran’s neo-feminist manifesto and memoir, How to Be a Woman? Don’t read it with a full bladder….You could spend a whole book group session flagging favorite lines…..There’s some comfort in Moran’s book coming out so soon after Nora Ephron’s death.”
— Heller McAlpin, Barnes & Noble Review

“Caitlin Moran is a feminist heroine for our times. I can’t wait to give this book to my daughters.”
— Zoë Heller, author of The Believers

“Caitlin Moran is the profane, witty and wonky best friend I wish I had. She’s the feminist rock star we need right now; How to Be a Woman is an hilarious delight.”
— Ayelet Waldman, author of Bad Mother