The Gentleman's Guide to Vice and Virtue (Montague Siblings #1) (Paperback) 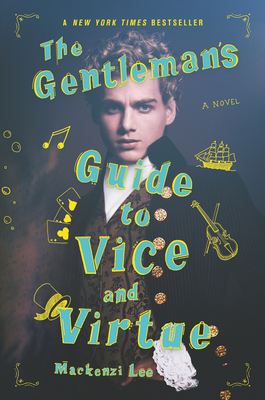 This is book number 1 in the Montague Siblings series.

Named one of the best books of 2017 by NPR and the New York Public Library!

"The queer teen historical you didn’t know was missing from your life.”—Teen Vogue

"A stunning powerhouse of a story."—School Library Journal

"A gleeful romp through history."—ALA Booklist

A young bisexual British lord embarks on an unforgettable Grand Tour of Europe with his best friend/secret crush. An 18th-century romantic adventure for the modern age written by This Monstrous Thing author Mackenzi Lee—Simon vs. the Homo Sapiens Agenda meets the 1700s.

Henry “Monty” Montague doesn’t care that his roguish passions are far from suitable for the gentleman he was born to be. But as Monty embarks on his grand tour of Europe, his quests for pleasure and vice are in danger of coming to an end. Not only does his father expect him to take over the family’s estate upon his return, but Monty is also nursing an impossible crush on his best friend and traveling companion, Percy.

So Monty vows to make this yearlong escapade one last hedonistic hurrah and flirt with Percy from Paris to Rome. But when one of Monty’s reckless decisions turns their trip abroad into a harrowing manhunt, it calls into question everything he knows, including his relationship with the boy he adores.

Witty, dazzling, and intriguing at every turn, The Gentleman's Guide to Vice and Virtue is an irresistible romp that explores the undeniably fine lines between friendship and love.

Don't miss Felicity's adventures in The Lady's Guide to Petticoats and Piracy, the highly anticipated sequel!

Mackenzi Lee holds a BA in history and an MFA from Simmons College in writing for children and young adults. Her short fiction and nonfiction has appeared in Atlas Obscura, the Boston Globe, Crixeo, and the Newport Review, among others. Her debut novel, This Monstrous Thing, won the PEN New England–Susan P. Bloom Children’s Book Discovery Award. Her second book, The Gentleman’s Guide to Vice and Virtue, was a New York Times bestseller and an ABA bestseller, earned five starred reviews, was a #1 Indie Next Pick, and received a 2018 Stonewall Book Award Honor and a New England Book Award. She loves Diet Coke, sweater weather, and Star Wars. On a perfect day, she can be found enjoying all three. She currently calls Boston home, where she works as an independent bookstore manager and pets every dog she meets. www.mackenzilee.com

★ “The book’s exquisite, bygone meter and vernacular sit comfortably on a contemporary shelf. And the friction of racism, tyrannical entitled politicians, and misguided disapproval of homosexuality also have a relevance rooted in current culture’s xeno- and homophobia. Austen, Wilde, and Indiana Jones converge in this deliciously anachronistic bonbon.”
— Kirkus Reviews (starred review)

★ “Tongue-in-cheek, wildly entertaining, and anachronistic in only the most delightful ways, this is a gleeful romp through history. Monty is a hero worthy of Oscar Wilde.”
— Booklist (starred review)

★ “This is a witty, romantic, and exceedingly smart look at discovering one’s place in the world. A stunning powerhouse of a story for every collection.”
— School Library Journal (starred review)

“Monty is pitch-perfect as a yearning, self-destructive, oblivious jerk of a hero who inspires equal parts sympathy, frustration, and adoration from reader. A genre tribute, satire, and exemplar in one.”
— The Horn Book

“If you’ve ever mentally shouted ‘NOW KISS’ at a pair of fictional male best friends, this is the book for you.”
— NPR

“Gentleman’s Guide to Vice and Virtue is the queer teen historical you didn’t know was missing from your life.” (“Best Queer Books to Celebrate Pride 2017”)
— Teen Vogue

“A rollicking ride that also turns a keen eye to issues like class, racism, homosexuality, and identity.”
— Brightly

“Careening from fete to fiasco on a Grand Tour of 18th century Europe, THE GENTLEMEN’S GUIDE TO VICE AND VIRTUE is a dizzying, dazzling, and roguishly romantic romp. This book makes me want to unrequite my own love so I can requite him all over again.”
— Heidi Heilig, author of THE GIRL FROM EVERYWHERE

“Don’t read this book unless you like adventure, hijinks, and forbidden romance, and if you do, then read it twice.”
— Stacey Lee, author of THE SECRET OF A HEART NOTE and UNDER A PAINTED SKY

“An outrageously fun, witty, fascinating, and romantic adventure, starring a memorable trio I’d happily travel with for ages. Lee is a definite force in diverse historical YA.”
— Dahlia Adler, founder of LGBTQ Reads and author of UNDER THE LIGHTS

“The Gentleman’s Guide to Vice and Virtue is a Grand Tour all its own. Hilarious and romantic, adventurous and scandalous, Monty’s adventures are just as delightful as Monty himself. I adored this book!”
— Rachel Hawkins, author of the Rebel Belle series

“A delightful romp of a road-trip through eighteenth century Europe, packed with witty dialog, razor-sharp pacing, and the perfect amount of swoon. You should abso-bloody-lutely read this book.”
— Erin Bowman, author of VENGEANCE ROAD

“Vice has never been more charming and virtue never more daring than in Mackenzie Lee’s superbly written globetrotting adventure. Not since Hamilton the musical has the 18th century been this much fun.”
— Amy Cherrix, Malaprop's Bookstore

“An incomparably delightful historical romp. I was swept away by Monty’s incorrigible voice from the very first page, and the rest of this confident adventure tale did not disappoint. Lee’s sophomore novel has heart, depth, and an abundance of wisecracks from a protagonist you can’t help but adore.”
— Rebecca Wells, Porter Square Books

“Simultaneously harrowing and hilarious, everything about this book from the serious questions posed about sexuality, chronic illness, and social inequality to the extraordinary journey Monty, his best friend, and his sister find themselves on make Mackenzi Lee’s latest the kind of book you’d be a fool to miss.”
— Gaby Salpeter, Books of Wonder

“Monty and Percy are insanely shippable from page one, and quickly became one of my favorite YA couples of all time.”
— Rachel Strolle, Anderson's Bookshop

“The John Hughes of queer 18th century adventure novels with an alchemical heart at its center. Lee perfectly captures teen humor and angst. I can’t wait to see what she writes next!”
— Alsace Walentine, Tombolo Books

“I can’t wait to get this book in my store—I know my customers looking for historical fiction and LGBTQ stories will adore GENTLEMAN’S GUIDE as much as I have!”
— Clarissa Hadge, Trident Booksellers

“Filled with highwaymen, pirates, and heart pounding exploits of a romantic nature, this is the summer road-trip adventure you’ve been waiting for.”
— Marika McCoola, Porter Square Books

“With roguish charm, sly wit, and tender heart, THE GENTLEMAN’S GUIDE TO VICE AND VIRTUE is a shameless flirt of a novel. If Monty and Percy hadn’t already stolen my heart, I would surrender it to them gladly.”
— Wendy Darling, The Midnight Garden

“An adventurous romp through 18th-century Europe with a trio of unforgettable characters. Lee weaves together the fun and the fantastical with a conversation on historical privilege that will resonate with modern readers. Perfect for fans of LA Meyer’s Bloody Jack series. Expect to fall in love with this book!”
— Nicole Brinkley, Oblong Books

An elegant, colorful, swashbuckling good time of a read and a beautiful addition to the LGBTQ+ genre. This is a great novel for upper YA readers and a great adult cross-over title. I definitely have a book hangover after finishing this gem.
— Amanda Zirn, Bethany Beach Books