No Mission Is Impossible: The Death-Defying Missions of the Israeli Special Forces (Paperback) 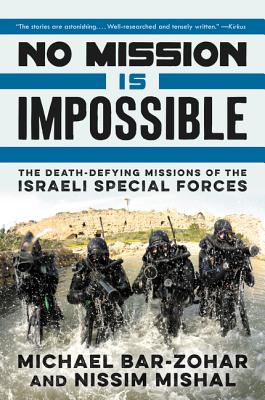 By Michael Bar-Zohar, Nissim Mishal
$17.99
Not currently in store. Available to ship from distributor's warehouse.

A riveting follow-up to Michael Bar-Zohar and Nissim Mishal’s account of the most memorable missions of the Mossad, No Mission Is Impossible sheds light on some of the most harrowing, nail-biting operations of the Israeli Special Forces.

In No Mission Is Impossible, Michael Bar-Zohar and Nissim Mishal depict in electrifying detail major battles, raids in enemy territory, and the death- defying commando missions of the Israeli Special Forces. The stories are often of victories, but sometimes also of immense failures, and they run side by side with the accounts of the lives and accomplishments of some of Israel’s most prominent figures.

Captivating and eye-opening, No Mission Is Impossible is essential reading for anyone interested in understanding how these crucial missions shaped Israel, and the world at large.

Michael Bar-Zohar is a writer, public speaker, and former lawmaker. Author of many novels and nonfiction books, he was a member of the Knesset and envoy to the Council of Europe. A former adviser to General Moshe Dayan, Dr. Bar-Zohar has also served as a professor at Haifa University in Israel and at Emory University in Atlanta, Georgia. He is one of Israel's foremost experts on espionage and the official biographer of David Ben-Gurion and Shimon Peres. He also wrote the biography of Isser Harel, the legendary Director of the Mossad, and co-authored The Quest for the Red Prince, which dealt with the bloody war between the Mossad and Black September. Bar-Zohar's books have been translated into eighteen languages.

Nissim Mishal is one of the foremost TV personalities in Israel. After graduating with a master's degree in political science, he joined the staff of the Israeli state television and worked as a political reporter, Washington correspondent, and, finally, its director-general. At the fiftieth and sixtieth anniversaries of Israel, Mishal published two record-selling books about the great events in Israel's history. They were translated into English, French, Russian, and Spanish. He has also coauthored a book on two thousand years of Judaism with Professor Shlomo Ben-Ami, a former Israeli minister of foreign affairs.