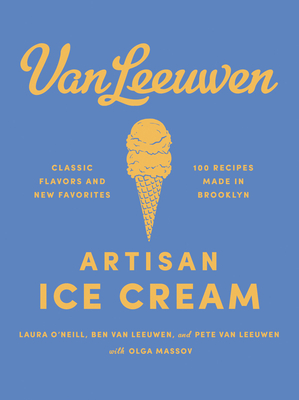 A collection of delicious and flavorful dairy and vegan ice creams made from simple, natural ingredients easily found in most pantries from Brooklyn’s beloved and wildly popular ice cream emporium.

“The flavors created by Van Leeuwen are what you’d expect from a Willy Wonka ice cream factory--if it were in Brooklyn.” -- Marie Claire

The Van Leeuwen Artisan Ice Cream Book includes ice cream recipes for every palate and season, from beloved favorites like Vanilla to adventurous treats inspired by a host of international culinary influences, such as Masala Chai with Black Peppercorns and Apple Crumble with Calvados and Crème Fraîche. Each recipe—from the classic to the unexpected, from the simple to the advanced—features intense natural flavors, low sugar, and the best ingredients available. They also highlight vegan and non-dairy ice cream techniques.

Determined to revive traditional ice cream making using only whole ingredients sourced from the finest small producers, Ben, Pete, and Laura opened their ice cream business in Greenpoint, Brooklyn, with little more than a pair of buttercup yellow trucks. In less than a decade, they’ve become a nationally recognized name while remaining steadfast to their commitment of bringing ice cream back to the basics: creating rich flavors using real ingredients.

Laura O'Neill left behind her life in Melbourne, Australia, to move to Greenpoint, Brooklyn, in 2007, after meeting Ben on a trip to London. Among the many facets of running a small business, she handles the company's design and marketing. Laura shares her home with her musician and artist boyfriend, Greg, and a very talkative cat, Gypsy. Outside of focusing on ice cream and Indonesian food, Laura spends her time playing in a band and throwing a weekly dance jam in the dark called No Lights, No Lycra.

Ben Van Leeuwen, the mad genius of ice cream recipe testing and recipe development, is the point person for the day-to-day number crunching. He also oversees and guides the growth of the Van Leeuwen business. When not in the test kitchen or perfecting spreadsheets, Ben regularly practices yoga and meditation and spends as much time as he can surrounded by nature.

Pete Van Leeuwen wears many hats, from initiating the launch of new products to getting his hands dirty fixing ice cream trucks. Not only does he spread his skills across the many aspects of the ice cream business, but he spreads them from coast to coast, overseeing Van Leeuwen's California expansion. When he's not dreaming up future novelty items, he can be found playing in a puppet rock opera, exploring the planet, or cooking for his little family of two dogs and one girlfriend.

“The flavors created by Van Leeuwen are what you’d expect from a Willy Wonka ice cream factory--if it were in Brooklyn.”
— Marie Claire

“If you can’t get to France yet yearn for some homemade frozen goodness, pick up Van Leeuwen Artisan Ice Cream.”
— Los Angeles Magazine

“The founders of Van Leeuwen Artisan Ice Cream chart their course from a humble pair of food trucks to a thriving business with several stores on both coasts. The secret to their success? Really good ice cream...”
— Publishers Weekly

“For those who will never consider making vegan ice creams, or are not up for a bit of project cooking, there are 90 other inventive recipes to choose from. But it’s the 10 cream-free variations that make this cookbook rise to the top.”
— New York Times