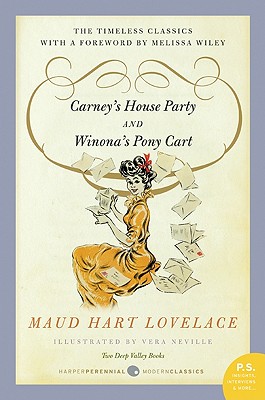 By Maud Hart Lovelace
$16.99
Available to Ship from Distributor's Warehouse

With a Foreword by Melissa Wiley

This beautiful edition brings together two of Maud Hart Lovelace’s beloved Deep Valley books: Carney's House Party and Winona's Pony Cart—standalone stories about two of the favorite characters from the Betsy-Tacy series, and features a foreword by author Melissa Wiley and a biography of illustrator Vera Neville.

"Carney is one of my favorite characters in Betsy's high school Crowd, and if ever a character deserved her own book, it is Caroline Sibley, that warmhearted, capable, mirthful intellighen girl whose home is the setting of so many lively Deep Valley adventures."—Melissa Wiley

"Winona adds a dash of spice to every scene she inhabits."—Melissa Wiley

"There are three authors whose body of work I have reread more than once over my adult life: Charles Dickens, Jane Austen, and Maud Hart Lovelace."—Anna Quindlen

"I reread these books every year."—Laura Lippman

Maud Hart Lovelace (1892-1980) based her Betsy-Tacy series on her own childhood. Her series still boasts legions of fans, many of whom are members of the Betsy-Tacy Society, a national organization based in Mankato, Minnesota.

“Slipping into a Betsy book is like slipping into a favorite pair of well-worn slippers: It’s always a pleasure to live in Betsy’s world for a little while, to experience her simple joys, but also her (thankfully short-lived) sorrows.”
— Meg Cabot, New York Times Bestselling Author

“There are three authors whose body of work I have reread more than once over my adult life: Charles Dickens, Jane Austen, and Maud Hart Lovelace.”
— Anna Quindlen, New York Times Bestselling Author

“I re-read these books every year, marveling at how a world so quaint--shirtwaists! Pompadours! Merry Widow hats!--can feature a heroine who is undeniably modern.”
— Laura Lippman, New York Times Bestselling Author

“I read every one of these Betsy-Tacy-Tib books twice. I loved them as a child, as a young adult, and now, reading them with my daughter, as a mother. What a wonderful world it was!”
— Bette Midler, actor and singer

“Some characters become your friends for life. That’s how it was for me with Betsy-Tacy.”
— Judy Blume, bestselling author

“The Betsy-Tacy books were among my favorites when I was growing up.”
— Nora Ephron, Academy Award-nominated director

“I am fairly certain that my independent, high-spirited grandmother must have had a childhood similar to Betsy Ray’s…As I read..., I felt that I was having an unexpected and welcome peek into Granny’s childhood-a gift to me from Maud Hart Lovelace.”
— Ann M. Martin, creator/author of The Baby-sitter's Club

“Family loyalty and the devotion of friends to one another, which for me are the defining characteristics of the Betsy-Tacy stories.”
— Esther Hautzig, Award-winning author, former Director of Children's Book Promotion for Thomas Y. Crowell Co., and former publicist for Betsy's Wedding in 1955

“I truly consider BETSY AND TACY GO DOWNTOWN to be the finest novel in the English language! I will never love any other books as much as I love the Betsy-Tacy books.”
— Claudia Mills, children's book author, winner of National Book Award and Golden Kite Award

“I grew up 30 miles north of Mankato, and trips to town were filled with mystery and magic, because I was walking the same streets that Betsy and Tacy once walked. The Betsy-Tacy books...., more than any other books, fed my dream of becoming a writer one day.”
— Jill Kalz, 2008 MN Book Awards Readers' Choice Award winner

“When I was growing up in the Bronx, I had lots of friends. But the girls I most enjoyed spending time with were Betsy, Tacy and Tib....in the series by Maud Hart Lovelace... - three girls full of good ideas, adventures and fun.”
— Johanna Hurwitz, award-winning author of more than sixty popular books for young readers

“I now realize that one of the reasons I believed I could someday become a writer was because of Betsy’s own infallible confidence that she would be a writer.
— Mary Kay Andews, New York Times Bestselling Author

“Maud Hart Lovelace and her “Betsy-Tacy” series influenced me very much when I was a girl; I identified with Betsy, who wanted to be a writer, as well as the friends’ girl-power.”
— Lorna Landvik, New York Times Bestselling Author

“Carney is one of my favorite characters in Betsy’s high school Crowd, and if ever a character deserved her own book, it is Caroline Sibley, that warmhearted, capable, mirthful, intelligent girl whose home is the setting of so many lively Deep Valley adventures.”
— Melissa Wiley, from her foreword to Carney's House Party and Winona's Pony Cart