Out of Captivity: Surviving 1,967 Days in the Colombian Jungle (Paperback) 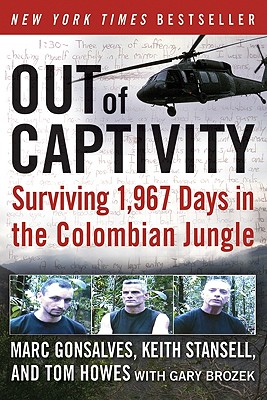 On February 13, 2003, a plane carrying three American military contractors--Marc Gonsalves, Tom Howes, and Keith Stansell--crashed in the mountainous jungle of Colombia. Dazed and shaken, they awoke covered in blood with automatic rifles pointing at their faces. As of that moment they belonged to the Colombian terrorist organization known as the FARC, American captives in Colombia′s volatile conflict that has stretched over the last half century. This harrowing crash and abduction began five and a half years of captivity at the hands of the FARC, as these three men struggled to survive the madness of their surroundings.

In OUT OF CAPTIVITY, Gonsalves, Howes, and Stansell recount their amazing tale of survival, friendship, and ultimately rescue in its entirety for the first time. Revealing the details of their crash, their horrific treatment at the hands of the FARC, what they witnessed as captives, and how they survived the experiences of their years, this book provides vivid firsthand accounts of their five and half years in the jungle. Offering a glimpse inside one of the world′s most notorious terrorist organizations, OUT OF CAPTIVITY tells the story of how far three Americans were willing to go as they fought to survive for themselves, their families, and each other.

A story of life, death, survival, and the saving power of friendship, OUT OF CAPTIVITY is a remarkable look at the unbreakable bonds between friends and indomitable strength of the human spirit.

Marc Gonsalves is a former member of the United States Air Force who worked as a civilian military contractor for four years before the crash. He has a daughter, Destiney, and two stepsons, Cody and Joey. He lives in Connecticut.

Tom Howes has been a pilot working in the United States and South America for thirty-seven years. He currently lives with his son, Tommy, in Merritt Island, Florida.

Keith Stansell is a former Marine in the United States Marine Corps. He lives with his daughter, Lauren, his son Kyle, his twins Keith Jr. and Nick, and his fiancée, Patricia, in Bradenton, Florida.

Gary Brozek is a freelance writer and the author of more than 20 books, including 6 New York Times bestsellers. He lives in Colorado.